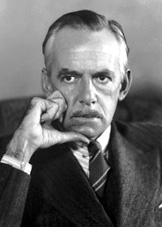 Eugene O'Neill (1888-1953) was an American playwright "famous for the bleak and tragic tone of his plays, which persistently examine the crushed hopes and dreams of the underprivileged."[1] His best-known plays include:

Four of his plays, Beyond the Horizon, Anna Christie, Strange Interlude, and Long Day's Journey into Night, were awarded the Pulitzer Prize, and O'Neill received the Nobel Prize for Literature in 1936 "for the power, honesty and deep-felt emotions of his dramatic works, which embody an original concept of tragedy".[2] He is regarded as "one of the greatest playwrights in American history".[3]