From Conservapedia
(Redirected from F-117)
Jump to: navigation, search 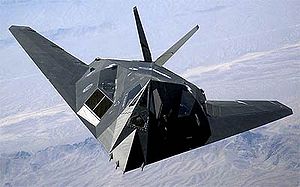 The Lockheed F-117A Nighthawk was the world's first operational aircraft based entirely on stealth technology. It was designed in the late 1970s by the highly creative Skunk Works engineering team at Lockheed Martin, and first manufactured in 1981. It is flown exclusively by United States Air Force. They are nearly invulnerable, which softens their price tag of $40 million somewhat.

Its "F-" label, usually reserved for fighters, may be for political purposes. The F-117A is not a fighter aircraft but is a "ground-attack" aircraft designed for precision bombing. However, the "F-" label is more politically popular and also may attract better pilots.

The F-117 has performed admirably in the Persian Gulf War, and in Afghanistan. During Operation Desert Storm, the "Wobblin' Goblins (named thus because of their unsteady, wobbly flight) operated from the Nevada desert, relying on KC-135 tanker aircraft to strike Iraq. They were the only coalition aircraft to bomb Baghdad. Only one has been lost in combat. It was shot down by Serbian air defenses with a Russian-made radar guided SA-3 Goa missile during the Kosovo campaign in 1999 [1][2].