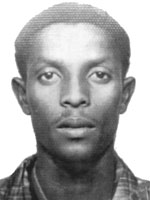 Fazul Abdullah Muhammad was alleged to be the leader of al-Qaeda in east Africa. Born in the Comoros, the 35-year-old terrorist is believed to have been involved in many operations, including a failed attempt at shooting down an Israeli airliner, a 2002 attack on a Mombasa hotel, and the bombing of an American embassy in Nairobi which resulted in 240 innocent civilian deaths.[1] The United States rated him as the most wanted terrorist in East Africa and has offered a $5 million award for information leading to the location of Fazul. In June 2007, the United States destroyer, USS Chafee, attacked the northern coastline of Somalia in an attempt to kill Fazul and other terrorists.[2] On June 8, 2011 he was successfully killed in Mogadishu.[3]