Fernand Braudel (1902-1985), was the foremost French historian of the postwar era, and a leader of the Annales School which emphasizes geographical influences and very-long-term trends over the centuries, and rejects Marxist class conflict models. He organized his scholarship around three great projects, each worth several decades of intense study: "The Mediterranean" (1923–49, then 1949-66), "Civilization and Capitalism" (1955–79), and the unfinished "Identity of France" (1970–85). His reputation stems in part from his writings, but even more from his success in making the Annales School the most important engine of historical research in France and much of the world after 1950.

At the age of twenty, he became an agrégé in history. While teaching at a secondary school in Algeria from 1923–32, he became fascinated by the Mediterranean Sea and everything about it. From 1932 to 1935 he taught in the Paris lycées of Pasteur, Condorcet, and Henry IV.

By 1900 the French solidified their cultural dominance in Brazil through the establishment of the Brazilian Academy of Fine Arts. Brazil still lacked a university, however, and in 1934 Francophile Julio de Mesquita Filho invited anthropologist Claude Lévi-Strauss and Braudel to help establish one. The result was formation of the new the University of São Paulo. Braudel later said that the time in Brazil was the "greatest period of his life."[1]

Braudel had already started archival research on his doctorate on the Mediterranean when he fell under the influence of the Annales School around 1938 when he entered the Ecole Pratique des Hautes Etudes as an instructor in history. He worked with Lucien Febvre, who would later read the early versions of Braudel's magnum opus and provide him with editorial advice. At the outbreak of war in 1939, he was called up and subsequently taken prisoner by the Germans, 1940-45. While a prisoner of war Braudel was without access to his books or notes; he relied on his prodigious memory to contemplate and draft his work.

In 1949 he was elected to the Collège de France upon Lucien Febvre’s retirement. In 1947, with Febvre and Charles Morazé, Braudel founded the famous Sixième Section for ‘Economic and social sciences’ at the Ecole Pratique des Hautes Etudes. He retired in 1968, and in 1983 was elected to the Académie française. 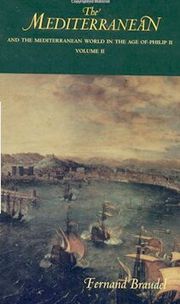 His first and greatest book, La Méditerranée et le Monde Méditerranéen à l'Epoque de Philippe II (1949) (The Mediterranean and the Mediterranean World in the Age of Philip II) was his most influential. The Mediterranean legacy in Europe included cultivated crops consumption habits, monotheistic religion, and mental and cultural tools such as the language, laws, and pretensions of the state, as well as urbanism, the prestige of the written word, and the instruments of chronology. The culture ceased to be dominant in the 15th or 16th century, but the new Atlantic culture embodied much of it and extended its elements to Siberia, the Americas, and the Antipodes.

For Braudel there is no single Mediterranean sea. There are many seas—indeed a "vast, complex expanse" in which men operate. Life is conducted on the Mediterranean: people travel, fish, fight wars, and drown in the many seas. Again, the sea gives on to plains and islands. Life on the plains is diverse and complex; the poorer south is affected by religious diversity (Catholicism and Islam), as well as by intrusions - both cultural and economic - from the wealthier north. In other words, the Mediterranean cannot be understood independently from what is exterior to it. Any rigid adherence to boundaries is a way of falsifying the situation.

The first level of time, geographical time, is that of the environment, with its slow, almost imperceptible change, its repetition and cycles. Change may be slow, but it is irresistible. The second level of time comprises social and cultural history, with social groupings, empires and civilizations. Change at this level is much more rapid than that of the environment; he looks at two or three centuries in order to spot a particular pattern, such as the rise and fall of various aristocracies. The third level of time is that of events (histoire événmentielle). This is the history of individuals with names. This, for Braudel, is the time of surfaces and deceptive effects. It is the time of the "courte durée" proper and it is exemplified by Part 3 of The Mediterranean which treats of "events, politics and people."

Braudel's Mediterranean is a complex of seas but just as important it is also the desert and the mountains. The desert creates a nomadic form of social organization where the whole community moves; mountain life is sedentary. Transhumance is also a factor—that is, the movement from the mountain to the plain, or vice versa in a given season.

Braudel's vast panoramic view used insights from other social sciences, employed the concept of the longue durée, and downplayed the importance of specific events. It was widely admired, but most historians did not try to replicate it and instead focused on their specialized monographs. The book dramatically raised the worldwide profile of the Annales School.

Braudel became the leader of the second generation of Annales historians after 1945. He obtained funding from the Rockefeller Foundation in New York and founded the 6th Section of the Ecole Pratique des Hautes Etudes, which was devoted to the study of history and the social sciences.[2] In 1962 he and Gaston Berger used Ford Foundation money and government funds to create a new independent foundation, the Fondation Maison des sciences de l'homme (FMSH), which Braudel directed from 1970 until his death. It was housed in the building called "Maison des Sciences de l'Homme". FMSH stressed international networking to spread the Annales gospel across Europe and the world. After a sort of palace coup in 1968 he had to share power, and in 1972 he gave up all editorial responsibility on the journal (although his name remained on the masthead).

Prior to the Annales approach, says Braudel, the writing of history was focused on the "courte durée" (short span), or on what is known as "histoire événmentielle" (a history of events). Political and diplomatic history has been the prime example of histoire événmentielle, which he rejected as too trivial.

His followers admired his use of the "longue durée" approach to stress slow, and often imperceptible effects of space, climate and technology on the actions of human beings in the past.[3] The Annales historians, after living through two world wars and incedible political upheavals in France, were deeply uncomfortable with the notion of multiple ruptures and discontinuities created history. They preferred to stress inertia and the longue durée. That is, the continuities of the deepest structures were central to history, beside which upheavals in institutions or the superstructure of social life were of little significance, for history lies beyond the reach of conscious actors, especially the will of revolutionaries. They rejected the Marxist idea that history should be used as a tool to foment and foster revolutions.[4]

Although an atheist who believed in historical materialism, Braudel rejected Marxist materialism, stressing the equal importance of infrastructure and superstructure, both of which reflected enduring social, economic, and cultural realities. Braudel's structures, including both mental and environmental frameworks, actually determine the "long-term" course of events in constraining actions on, and by, humans over a duration which escapes the consciousness of the actors involved. His influence greatly weakened Marxist historiography in France and other countries.

Barudel in his three-volume Civilisation Matérielle, Economie, et Capitalisme (1979) (Capitalism and Material Life ), a sweeping study of preindustrial capitalism the world over, returned to economic themes that interested the Annales historians of the 1930s but had otherwise been neglected by the school. There is little original research but instead a synthesis of a great deal of work by many scholars, some of it outdated. Braudel prefers descriptive detail rather than theoretical constructs, avoid all economic theory, and uses statistical data as illustration rather than an analytic tool.

Braudel argued that capitalists have typically been monopolists, not, as is usually assumed, entrepreneurs operating in competitive markets. He argued that capitalists did not specialize and did not use free markets. He thus diverged from both liberal (Adam Smith) and Marxian interpretations. In Braudel's view, Under capitalism, the state has served as a guarantor of monopolists rather than as the protector of competition usually portrayed. He said capitalists have had power and cunning on their side, and they have been arrayed against the majority of the population. Few historians have followed up this lead.[5]

Books and articles by Braudel