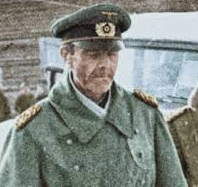 Field Marshal Friedrich Paulus (1890-1957) led the German Sixth Army during the Battle of Stalingrad. On November 23, 1942, the Sixth Army was encircled by Soviet forces led by Soviet Marshall Georgy Zhukov. German Chancellor Adolf Hitler order Paulus and the troops not to surrender and to fight to the last man. On January 30, 1943, Hitler promoted Paulus to Field Marshall, knowing that no German Field Marshall had ever been captured in combat. Hitler expected Paulus to shoot himself rather than surrender or allow himself to be captured. The next day on January 31, Paulus surrendered to the Red Army.

The Germans attempted to negotiate a prisoner swap of Paulus for Stalin's eldest son, Yakov Iosifovich, but Stalin refused. Paulus survived into the post-World War II period, and was used by the Soviet Union for propaganda purposes to discredit the living memory of Adolf Hitler and establish credibility for the East German state.