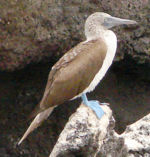 Blue-footed booby
The Galápagos Islands is an archipelago of 17 volcanic islands, situated in the Pacific Ocean 600 miles to the west of Ecuador. They are noted for their unique animal and bird life which led the naturalist Charles Darwin to formulate his Theory of Natural Selection. The name Galápagos derives from the Spanish word for saddle, as the shape of some of the indigenous species of tortoise resembled a saddle. The official name of the islands is Archipiélago de Colón but even official government documents refer to them as the Galapagos Islands.

Their remote location meant that the islands had few visitors and almost all of the animals exhibit no natural fear of man. However, a rising population, the presence of feral pigs and goats, and the pressures of mass tourism have begun to threaten the existence of some species. On April 10, 2007 Rafael Correa Delgado the President of Ecuador issued an emergency decree[1] calling for sustainable development.

The Galápagos Islands are a UNESCO World Heritage Site.[2]

30,000 people live in the archipelago on 4 of the islands. Most of these are fishermen and there have been many differences of opinion between them and the National Park with regards to overfishing. To date the Galapagos sea cumber and lobster have been rendered nearly extinct due to overfishing. There is a rising trend in the illegal fishing of Sharks for their fins in recent years. Efforts to curb overfishing has led to rioting, death threats against Lonesome George and slaughter of Giant Tortises.[3]

The Galápagos Islands lie above a volcanic "hot spot" (similar to the Hawaiian Islands) where the Nazca and South American plates meet. The islands are essential the tip of a giagantic shield volcano that rises up to 10000 ft above the ocean floor. As the plate moves eastwards, new volcanic cones are formed so that the eastern islands are much older and eroded than those to the west, which are still volcanically active.[4]

One of Darwin's finches

Another of Darwin's finches

Darwin collected many biological specimens during the Voyage of the Beagle (1831-1836), which included birds from the Galápagos Islands. These were presented to the Geological Society of London upon his return and the birds were handed to an ornithologist for classification. From the differences in the shapes of their beaks Darwin had assumed they were different types of bird (blackbirds, grosbeaks, finches) but the ornithologist classified them as being different species of ground finch. Darwin surmised that, with little competition from other birds, individual varieties had evolved to fill ecological niches to utilize a wider range of food sources. When his journal[5] was published in 1843, he included this knowledge, which has misled many to think that he had developed his Theory of Natural Selection during his journey.

Some Creationists claim that the different types of finch interbreed and are therefore not different species.[6] Some say it supports adaptation.[7]

Santa Cruz giant tortoise
The larger Galápagos Islands are home to different types of giant tortoise. These were previously in great abundance numbering in the 100,000s, but with no native predators they had no natural defence mechanisms other than their hard shell. They became an easy food source for passing sailors who took them in great numbers to provide fresh meat during their journey. Owing to their smaller size the females were usually taken first as they were easier to handle. A full-grown male tortoise can weigh up to 500 lbs.

There were originally 15 different sub-species of tortoise, each found on a different island. The number of sub-species alive today is 11, the others having been rendered extinct by the combined actions of man and his imported animals.[8] For the sub-species from Isla Pinta only one male specimen (thought to be 170 years old) died on 24 July 2012. This is the famous "Lonesome George", who for over 30 years has been unable to engage in a breeding program to try and maintain the sub-species. However, captive breeding of the other endangered sub-species has brought them back from the brink of extinction.[9]

The Galápagos are home to two species of large iguana. The marine iguanas are unique in being the only aquatic lizard and feed on algae. They have developed mechanisms to help them cope with the salt water and can frequently be observed snorting salt from their nostrils. Although the Galápagos Islands lie just below the equator, a deep cold-water upwelling makes the waters around the islands extremely rich in sea-life. This provides a valuable food source for a wide range of sea birds. These include several species of boobies (blue-footed, red-footed and nazca), waved albatross, frigatebirds, lava herons and the most northerly species of penguin. Inland lagoons support a colony of pink flamingoes. The Galápagos hawk is one of a few raptors that live on the islands.