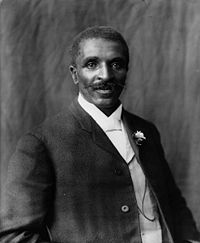 George Washington Carver (1864–1943) was a devout Christian and leading African American scientist in the South after the Civil War. Born into slavery near Diamond Grove, Missouri, Carver was raised by German immigrants, Moses and Susan Carver, but left home when he was eleven years old and later worked his own way through college at Iowa State, where he also earned a master's degree. He spent the last 46 years of his life as a faculty member at Booker T. Washington's Tuskegee Institute.

He is known for introducing and developing hundreds of uses for the peanut, sweet potato and soybean in the American South, after the tobacco crop was devastated by insects. He did not seek a patent for peanut butter, in part because he believed that it was a gift from God.[1]

"Human need is really a great spiritual vacuum which God seeks to fill... With one hand in the hand of a fellow man in need and the other in the hand of Christ, He could get across the vacuum... Then the passage, 'I can do all things through Christ which strengthens me,' came to have real meaning." (1928)