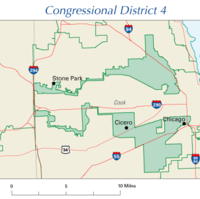 Gerrymandering is a term that refers to purposeful rearranging of district lines in order to influence the outcome of an election or to favor one political party over another.[1] The first instance of gerrymandering in the United States occurred during the 1800 presidential election between John Adams and Thomas Jefferson.

The result of the rearranging of districts helped Jefferson win the extremely close presidential race by a vote of the House of Representatives.[4]

The term is named after Elbridge Gerry.

In Cooper v. Harris, Liberals supported race-based gerrymandering from a constitutional perspective during and in the years after the Civil Rights movement because it would lead to the highest rates of minority elected officials, but they changed their position (again from a constitutional standpoint) after it became clear they could gain more seats through having courts strike down race-based gerrymandering.[5] This is an example of the "Living Constitution" ideology.

Although many commentators have claimed gerrymandering is the reason for the increasing polarization in the United States, the evidence suggests that political polarization increased due to like-minded people moving to the same areas as each other.[6]