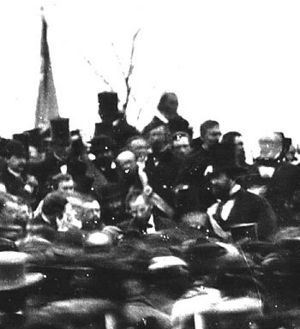 Abraham Lincoln (center) at the dedication of the national cemetery at Gettysburg, November 19, 1863.

The Gettysburg Address is short speech by Abraham Lincoln which took its most famous expressions from the Bible, without giving it credit. Its opening line—fourscore and seven years ago—is a play on the biblical expression about how the lifespan of an average person is threescore and ten years: "The days of our years are threescore years and ten; and if by reason of strength they be fourscore years, yet is their strength labour and sorrow; for it is soon cut off, and we fly away."[1] The famous conclusion in the Gettysburg Address is a paraphrase of the General Prologue to the first English translation of the Bible by John Wycliffe (1384): "This Bible is for the Government of the People, by the People, and for the People."

The Gettysburg Address, delivered by Abraham Lincoln as he personally was acquiring a stronger faith in God, embodies the belief in Manifest Destiny that America is "the last best hope of earth."[2]

At the end of the Battle of Gettysburg, more than 51,000 Confederate and Union soldiers were wounded, missing, or dead. Many of those who died were laid in makeshift graves along the battlefield. Pennsylvania Governor Andrew Curtin commissioned David Wills, an attorney, to purchase land for a proper burial site for the deceased Union soldiers. Wills acquired 17 acres for the cemetery, which was planned and designed by landscape architect William Saunders.

The cemetery was dedicated on November 19, 1863. The main speaker for the event was Edward Everett, one of the nation's foremost orators. President Abraham Lincoln was also invited to speak “as Chief Executive of the nation, formally [to] set apart these grounds to their sacred use by a few appropriate remarks.” At the ceremony, Everett spoke for more than 2 hours; Lincoln spoke for 2 minutes.

President Lincoln had given his brief speech a lot of thought. He saw meaning in the fact that the Union victory at Gettysburg coincided with the nation's birthday; but rather than focus on the specific battle in his remarks, he wanted to present a broad statement about the larger significance of the war. He invoked the Declaration of Independence, and its principles of liberty and equality, and he spoke of “a new birth of freedom” for the nation. In his brief address, he continued to reshape the aims of the war for the American people—transforming it from a war for Union to a war for Union and freedom. Although Lincoln expressed disappointment in the speech initially, and it was poorly received nationally (The Chicago Times commented that "The cheek of every American must tingle with shame as he reads the silly, flat and dishwatery utterances") it has since come to be regarded as one of the most elegant and eloquent speeches in U.S. history.[3]

"Four score and seven years ago our fathers brought forth on this continent, a new nation, conceived in Liberty, and dedicated to the proposition that all men are created equal.[4]

Now we are engaged in a great civil war, testing whether that nation, or any nation so conceived and so dedicated, can long endure. We are met on a great battle-field of that war. We have come to dedicate a portion of that field, as a final resting place for those who here gave their lives that that nation might live. It is altogether fitting and proper that we should do this.

But, in a larger sense, we can not dedicate -- we can not consecrate -- we can not hallow -- this ground. The brave men, living and dead, who struggled here, have consecrated it, far above our poor power to add or detract. The world will little note, nor long remember what we say here, but it can never forget what they did here. It is for us the living, rather, to be dedicated here to the unfinished work which they who fought here have thus far so nobly advanced. It is rather for us to be here dedicated to the great task remaining before us -- that from these honored dead we take increased devotion to that cause for which they gave the last full measure of devotion -- that we here highly resolve that these dead shall not have died in vain -- that this nation, under God, shall have a new birth of freedom -- and that government of the people, by the people, for the people, shall not perish from the earth."