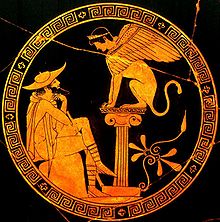 A Greek tragedy is a form of story popularized in ancient Greece where the main character falls from a position of power or prominence based upon a mistake that he made, often due to a character flaw. The sudden twist of fate is unexpected by the main character until it is too late. Many examples survive in Greek plays from that period. One such example would be the story of Oedipus.