Christine Pelosi, daughter of House Speaker Nancy Pelosi, issued a heads up to loyal Democrats: "It is quite likely that some of our faves are implicated," when the news of Jeffrey Epstein's arrest, who groomed young girls for sexual exploitation by the rich and elite, was announced.[1]

In the United States, public school teachers have been accused of grooming schoolchildren into transgenderism.[3] In the United Kingdom, police and local city councils and prosecutors are known to have sanctioned criminal grooming gangs, using hate crime laws to prosecute parents and dissidents who have tried to expose the corruption.[4] A grooming gang is a term used by leftist media in the UK to refer to multiple individuals, often first or second generation immigrants, that enslave children of the host culture into prostitution and human trafficking.

In 2021, Ghislaine Maxwell was prosecuted for grooming underage girls for sexual abuse by the world's corrupt elites and globalists,[5] while CNN producer John Griffen was arrested for grooming girls as young as 7 for "sexual subservience."[6] 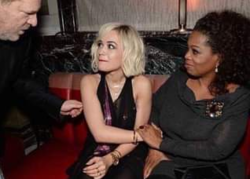 According to the Coalition for Children, the steps in grooming a child for sexual abuse may include the following:[7]

A pair of public school teachers at Buena Vista Middle School in Salinas, California were exposed for encouraging their fellow teachers to identify alleged LGBT schoolchildren, recruit them into LGBT clubs under false pretenses and then hide their in-club activities from the parents. The two were seen in video footage from a teleconference held by the California Teachers Association union. Both are members of the union. According to reports, both had already created their own LGBT club, “You Be You,” at Buena Vista. After their exposure, the school district suspended the club and issued a ban prohibiting teachers “from monitoring students’ online activity for any non-academic purposes.” The teacher reportedly told her that her daughter was “trans fluid. I sat across the table, and I was crying. I was trying to absorb everything. They kept looking at me angrily because I kept saying ‘she,’ and that it was going to take me time to time to process everything. I was very confused. … I was very upset. I was blindsided—completely blindsided,” she told the Times.

The teacher accused the mother, Jessica Konen, of not being ’emotionally supportive’ of her daughter, who was to be called by a new name and male pronouns and would be using the unisex restroom at school, according to the Epoch Times. “I felt she completely coached my child,” the mother said, referring to the teacher. "It made me feel very, very small as a parent. I was unaware of anything. Not one time had she mentioned to me ‘Oh, I think that I want to change my name,’ or ‘I’m transgender’ or anything. Nothing. I only heard bisexual one time, and that was it,” she added.

A couple days later, the police showed up at the couple’s home because of a complaint to California Child Protective Services (CPS) that had been filed by the school. After the family met with CPS, the complaint was dropped. At the local school board meeting, the mother attested,

Also in attendance was the child’s father. He revealed that they’d been told by the teachers that their daughter is a supposed "transgender", they’d had the cops sicced on them for refusing to use the pronouns the teachers had assigned to the child. Chris Cuomo and John Griffen, who was arrested on child sex charges days after Cuomo was fired.[9]

CNN producer John Griffen, who claimed he worked “shoulder-to-shoulder” with CNN anchor Chris Cuomo, was taken into custody by the FBI which acted after a grand jury delivered an indictment that Griffen used social media to “communicate with people purporting to be parents of minor daughters” in order to try to “persuade parents to allow him to train their daughters to be sexually submissive.” Details emerged from an unsealed indictment including that he “sexually trained girls as young as 7 years old” and advised a mother that her 14-year-old daughter “would be a good candidate for such training.”

According to the Vermont US Attorney, the indictment “also includes specific allegations that Griffin attempted to entice two other children over the internet to engage in sexual activity” via a “virtual training session” in which he would instruct a “mother and her 14-year-old daughter to remove their clothing and touch each other at his direction,” according to the statement.

The FBI seized the CNN producer's electronic devices two months before the 2020 election, on September 2, 2020 and did nothing for more than one year.[10]

Griffin worked at CNN for nine years, many of them during Cuomo’s stint on “New Day.”[11] The same week as Griffen's arrest on the heels of Chris Cuomo's firing, more allegations of pedophilia emerged against a second CNN producer.[12] After Epstein's release from jail for his conviction on child sex charges, George Stephanopoulos, Chelsea Handler and Katie Couric attended a dinner party at his New York apartment.[13][14]

In 2011 Vicky Ward posted an essay about Epstein and his circle. Ward wrote about Ghislaine Maxwell in glowing terms as "always the most interesting, the most vivacious, the most unusual person in any room. I've spent hours talking to her about the Third World at a bar until two a.m. She is as passionate as she is knowledgeable."[15]

Ghislaine Maxwell, who victims identify as procuring underage girls, is a donor to the 2016 Hillary Clinton Presidential campaign and attended Chelsea Clinton's wedding in 2010.[16]

A UK think tank issued a report in December 2017. Grooming gangs were studied going back to 2005. The report found:

"a disproportionate representation of males with (South) ‘Asian’ heritage who have been convicted in such cases, with this ethnicity male perpetrator/white female victim dynamic serving as the prominent feature of these grooming gangs. Most of these men are of Pakistani (Muslim) origin, and the majority of their victims are young, white girls. The report suggests that the background of these men has influenced their actions. The report found that 84% of ‘grooming gang’ offenders were (South) Asian, while they only make up 7% of total UK population.[17]

The researchers who compiled the study are both Pakistani Brits. As many as one million British children may have been victims of Muslim grooming gangs. Studies show a Muslim is 170 times more likely to be involved in grooming gangs than a non-Muslim.[18]

When the report was issued, UK Home Secretary Sajid Javid said it was "wrong to ignore ethnicity" of the criminals.[19]

In one UK city alone, 1,400 non-Muslim girls were groomed, raped, trafficked, and drugged between 1997 and 2013 while those in authority failed to act. The police have been accused of ignoring sex abuse claims because of political correctness and fear of accusation of racism, as well as allegedly blaming some child victims.[20] Leftist organizations waged relentless war against anyone who spoke out about Muslim rape gangs. Victims and critics were demonized as "Islamophobic," “hateful” and “bigoted.”[21]

UK police, who turned a blind eye to Pakastani rape culture and blamed victims,[22] have urged the public to report ‘non-crime’ incidents in an effort to stop non-criminal comments from hurting the feelings of those affected. The message sent out by the official Twitter account of South Yorkshire Police said, “In addition to reporting hate crime, please report non-crime hate incidents, which can include things like offensive or insulting comments, online, in person or in writing.”[23] So, while rape and murder of ethnic Brits by Muslim immigrants is ignored, the UK police do have time to investigate non-crimes and harass native citizens.

The sister of a 14-year girl who was murdered by a pimp was convicted of a "racially aggravated assault" for slapping a suspect who stated that he chopped up her body and cooked it into kebabs. The case was tossed out. The police botched the investigation.[24] This is only one such story among hundreds that have gone unreported by global leftist mainstream media. Independent journalist Tommy Robinson has forced the spotlight on the rape jihad occurring in Europe, and has been prosecuted and demonized for doing it.[25]

The leaders of Britain First were jailed for calling attention to Muslim sex-grooming gangs preying on British girls.[26]

Peter McLoughlin, Ph.D. the author of a detailed study of grooming gangs, Easy Meat: Inside Britain's Grooming Gang Scandal (Paperback 2016) concluded that they are the logical outcome of Islamic doctrines. Under Islamic law, the Muslim man commits no sin in making sexual use of non-Muslim females, who may be enslaved or used as concubines. Raping or drugging infidel girls is not a sin in their eyes and age of consent laws do not exist. McLoughlin was banned from Twitter for advertising his book. He is still using an account on GAB.

Tommy Robinson served what was originally a 13-month prison sentence for contempt of court after publishing a Facebook Live video of Pakistani grooming gang defendants entering a law court in defiance of restrictions on reporting ongoing trials.[27] He was illegally arrested on May 26, 2018 for this, and the judge presiding over his case, Geoffrey Marson,[28] illegally ordered all details related to his arrest and trial, including his identity, to be banned from being published by the country's media.[29]

CNN globalist network producer John Griffen said "a woman is a woman regardless of age,"[30] using the same language the leftwing elitist The New York Times used to refer to the "underage women" victims that Jeffrey Epstein and Ghislaine Maxwell procured for abuse by the global elite.[31]