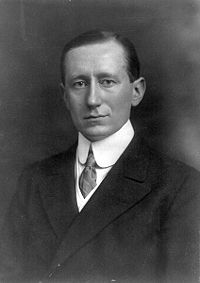 Guglielmo Marconi (1874-1937) was an Italian electrical engineer who is often credited as the "inventor" of the wireless telegraph and the radio.

The groundwork for radio had been laid by James Clerk Maxwell, whose equations predicted the existence of radio waves, and Heinrich Hertz, who first discovered them in the laboratory. Several inventors, notably Oliver Lodge, were working on wireless telegraphy (see also Nikola Tesla).

Marconi, however, had the entrepreneurial spirit and a relentless drive to turn wireless telegraphy into a practical reality. Working mostly by trial and error, he made improvement after improvement, constantly making his receivers more sensitive and his transmitters more powerful. He also built up a business, originally in ship-to-shore communication, training Marconi operators and installing Marconi service in ships.

He was driven by the desire to demonstrate communication across the Atlantic Ocean. He built stations at Wellfleet on Cape Cod, in Newfoundland, and Cornwall, England. It is not completely clear why he thought this was so important, as the Atlantic Cable was already in operation, providing reliable telegraph service, but he may have known that this would capture the public imagination and prove the practicality of radio as nothing else would. He succeeded in 1902, and perhaps it was this as much as anything else that made "Marconi" synonymous with "radio."

Marconi did not develop "radio" as we use the word today, i.e. voice communication (radio telephony), or the broadcasting of radio programs. That was the work of others, notably Reginald Fessenden.

For his achievements, Marconi shared the Nobel Prize in physics in 1909.

A recent bestselling nonfiction book by Erik Larson, Thunderstruck, tells the interleaved stories of Marconi's development of radio and a famous real murder case, the Crippen murder. The stories converge because Crippen and his mistress believed they were safely escaping from England on an ocean liner. They were unaware that the captain of the ship suspected them and had radioed back to London. Crippen would chat at dinner with the captain, totally unaware that the Marconi operator was in touch with the British police, that a detective had boarded a faster ocean liner and was chasing Crippen, and that millions of people were reading about the chase in newspapers every day.