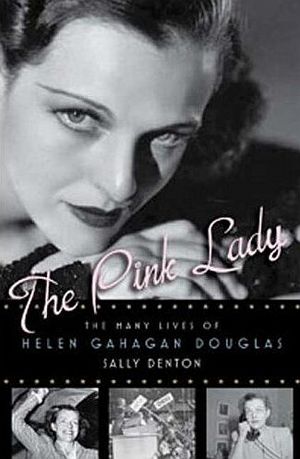 Helen Gahagan Douglas (1900–80 ) was a leading liberal politician in California in the 1940s. She is best known for her campaign for Senate in 1950 in which she was decisively defeated because of her far-left positions by Republican Richard Nixon. Douglas was a Broadway star, opera prima donna, friend of FDR, lover of LBJ, passionate New Dealer and opponent of the Cold War against Soviet Communism. She demanded that the U.S. "should limit the power of the military and try to disarm the world and get along with Russia." She is best known for calling Nixon "Tricky Dick." His triumphant victory in 1950 seriously damaged the far left of the Democratic party and propelled Nixon to the Vice presidency in 1952.

Born to a wealthy Protestant Irish family in New York, she dropped out of college for a career on Broadway. He fabulous beauty brought choice parts; she toured Europe as an opera star. Returning to the U.S. she married fellow actor Melvyn Douglas (1901-1981); he became a big Hollywood star and she played bit parts.

She became active in Democratic politics, forming ties with Eleanor Roosevelt. She made 250 campaign speeches for Franklin D. Roosevelt's reelection campaign in 1940. Looking around for a base, she left Hollywood and won the Democratic nomination for Congress from a liberal, largely African American district in Los Angeles in 1944. For years she was secretly the lover of Lyndon B. Johnson, a Congressman and Senator.

She was elected three times to Congress from Los Angeles (1944-46-48), where she earned the "pink lady" sobriquet (from her Democratic primary opponent) for voting together with far left Congressman Vito Marcantonio. A prominent dove in the early stages of the Cold War, her favorite theme was weakening the American nuclear deterrent against the Soviet Union. She opposed the Truman Doctrine of opposition to Communism in Europe. Truman in turn refused to campaign for her in 1950.