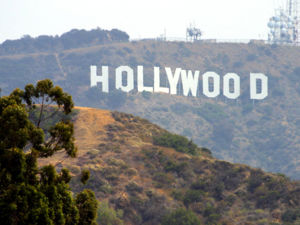 Hollywood is a district located in the city of Los Angeles, California. It is the historic base of the movie industry, although the studios have mostly moved out. "Hollywood" now generally refers to the entertainment industry and its culture (see: Hollywood Values), which is based primarily in Los Angeles County.

Hollywood is famous for its self-centeredness, liberal claptrap, and lack of independent thinking. Nearly all supported Barack Obama in robotic fashion. Robert DeNiro was no exception, insisting that Obama would "do better in the next four years."[1] Likewise, almost all of Hollywood's public figures opposed Donald Trump.

Writers such as Michael Medved,[2] Michael Crichton and Ben Shapiro have criticized Hollywood.