From Conservapedia
(Redirected from Homo neanderthalensis)
Jump to: navigation, search

A Neanderthal, Homo sapiens neanderthalensis or Homo neanderthalensis, is a member of a species of extinct hominid of which many fossils have been found. The first fossil hominid to be identified as such, and the best known, it was named after remains found in the Neander valley in western Germany in 1856. Neanderthal is found throughout Europe and the Near East. Neanderthals are associated with the Middle Palaeolithic Mousterian tool tradition.[1] 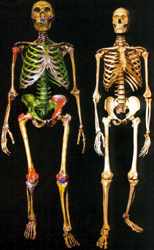 Neanderthal (left) and modern human (right) skeletons, showing both the similarities and the differences between the two.

A Neanderthal was a fully erect biped of stocky build, with a long low skull, prominent brow ridges and occiputs, and a jutting face. Neanderthals were on average more muscular than modern humans and lacked a chin. Presumably, they were social creatures living in small tribes, like other humans of their time. Neanderthals also possessed the skull features required for speech.[2] The popular impression of them as stooping brutes is incorrect and derives from the original poor reconstruction in the Neander valley. It has also been suggested that the first individual found suffered from vitamin D deficiency (rickets) or syphilis. Whether Neanderthals did interbreed with anatomically modern humans, or if this was even possible, is not agreed. Neantherthals had a gene associated with language and speech, that had the same variation as found in modern humans but is different from the equivalent gene found in chimpanzees.[3]

Neanderthal also had an average brain size of 1,450 cc with a range from 1,125cc to 1,750cc. The average modern human brain size is 1,330cc. Many Neanderthal fossils have been recovered showing massive amounts of wear on the teeth, which to many physical anthropologists suggests that the teeth were regularly used for gripping skins during stretching and working.[4]

The Institute for Creation Research (ICR) wrote the following regarding Neanderthal man:

Neanderthals were probably about as intelligent as an average modern human, they were social creatures living in small tribes, like the other human species of their time. Studies suggest that Neanderthal tribes interacted less with each other than other tribes did.[Citation Needed]

Neanderthals had the ability to make fire. They never invented projectile weapons, but relied on spears with limited range, even when facing large animals. It was likely their robust bodies that enabled them to use this hunting style that was considered far too dangerous by other humans.[Citation Needed] A common hunting technique was to drive prey animals off a cliff, or to corner their prey and finish them off with spears, much like today's Pygmies hunt elephants.[Citation Needed]

Evidence of care for the elderly and the sick has been found in the Shanidar Caves in Iraq,[6] they also used medicinal plants, made clothes out of animal skins and used stone tools. A find at rock shelters in La Ferrassie, France indicates elaborate burials, suggesting some sort of religion.[7] Interestingly archaeologists have never found Neanderthal cave drawings, although hand-crafted art has been found.[8]

History according to Creationists

Young Earth Creationists and scientists believe that Neanderthals were as fully human as we are.[9] This is based on evidence such as:

-Some DNA from Neanderthals is believed to make up all non-African genomes.[10]

The Institute for Creation Research explains about the DNA evidence:

Harsh conditions due to the Ice Age after the Great flood caused human groups to migrate and splinter off to survive. Neanderthal type traits were best suited for the harsh cold. Malnutrition and longer life spans could cause features similar to those seen in Neanderthal skeletons.[12]

History according to Evolutionists

The last refuges of the Neanderthals, with evolutionary dates.

Evolutionists claim that Neanderthal man developed from Homo erectus, though the widespread distribution of intermediate forms hinders an attempt to resolve any single geographical locality as the place of development. The fate of Neanderthals is equally hard to determine, but they are believed to have gone extinct between 28,000 and 24,000 years ago,[13] but how or why is unknown: many theories have been presented, these are the most common ones:

Evolutionists consider it likely that a combination of at least some of these factors led to the extinction of the Neanderthals.

Neanderthal Man is not considered to be a direct ancestor of modern humans, but its remains are examples of transitional fossils along a subsidiary branch, an evolutionary dead end.[Citation Needed]