Syphilis is a sexually transmitted disease caused by the bacteria Treponema pallidum. Syphilis originated in the New World and was introduced to Europe in the late 15th century by Spanish explorers returning from the New World.[1] The first European record of a syphilis epidemic was in 1493, a year after the explorer Columbus discovered America.

Syphilis has caused the death, derangement, or diminished mental capacity of many famous people throughout history. Lenin's debilitating health problems and strokes while barely 50 years old are thought to have been caused by syphilis;[2] Al Capone was ravaged by this disease until his mental capacity reduced to that of a 12-year-old.[3] 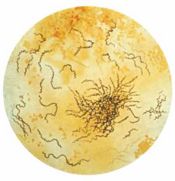 Syphilis is an infectious disease. The bacteria that causes it spreads through broken skin or mucous membranes. It is most often spread by sexual contact.

Pregnant mothers infected with the disease can pass it to the baby developing in their womb. This is called congenital syphilis.

Syphilis infection in the United States mainly occurs between sexually active adults aged from 20 to 29, with around 20,000 to 30,000 cases reported per year.

In respect to syphilis and homosexuality, an early publication to propose the link between homosexuality contributing to the spread of the sexually transmitted disease syphilis was the English publication Proceedings of the Royal Society of Medicine in 1962.[4] The Proceedings of the Royal Society of Medicine made the following statement: "The importance of homosexual practices in the spread of venereal diseases has attracted particular attention recently. It almost seems that these practices are keeping syphilis alive in this country." [5]

The Centers for Disease Control and Prevention (CDC) stated the following regarding homosexuality and syphilis:

Syphilis is one of the maladies of gay bowel syndrome which is a condition which has been linked to HIV Infection.[8][9]

The symptoms of syphilis depend on the stage of the disease. Many people do not have symptoms.

In general, painless sores and swollen lymph nodes are symptoms of primary syphilis. Those with secondary syphilis may also have fever, fatigue, aches and pains, and loss of appetite, among other symptoms. Tertiary syphilis causes heart, brain, and nervous system problems.

Primary syphilis is the first stage. Painless sores ( chancres ) form about 2–3 weeks after you are first infected. You may not notice the sores or any symptoms, particularly if the sores are inside the rectum or cervix. The sores disappear in about 4–6 weeks.

Secondary syphilis occurs about 2–8 weeks after the first sores form. About 33% of those who do not have primary syphilis treated will develop this second stage.

Tertiary syphilis is the final stage of syphilis. The infection spreads to the brain, nervous system, heart, skin, and bones.

Blood tests can be done to detect substances produced by the bacteria that causes syphilis. The older test is the VDRL test. Other blood tests may include RPR and FTA-ABS.

Syphillis is most effectively prevented by practicing abstinence. However, syphilis can also be transmitted through mucous membranes, open sores, and cut skin.

Antibiotics are used to treat syphilis. The antibiotic of choice is penicillin, yet doxycycline may be used as an alternative in individuals with a penicillin allergy.

The penicillin is either injected into a muscle or vein, depending on what stage syphilis the person has.

Several hours after treatment of early stages of syphilis, there may be a reaction called Jarish-Herxheimer reaction. Symptoms of this reaction include:

These symptoms usually disappear within 24 hours.

A person undergoing Syphilis treatment must have follow-up blood tests at 3, 6, 12, and 24 months to make sure the infection is gone. They should avoid sexual conduct until two follow-up tests show that the infection has been cured. Syphilis is extremely contagious in the primary and secondary stages.

Syphilis is a reportable infection—that means that doctors must reported any cases of syphilis to public health authorities, so that potentially infected sexual partners may be identified and treated.

With prompt treatment and follow-up care, syphilis can be cured.

Late-stage syphilis can lead to long-term health problems, despite therapy.

Complications of untreated syphilis include:

Neurosyphilis
Heart and blood vessel problems, including aneurysms and inflammation of the aorta
Damage to the skin and bones