Tuberculosis, also known as "TB" or "consumption", is a multi-system disease caused by the organism Mycobacterium tuberculosis.

Approximately one-third of the world population is infected with TB at any given time, with approximately 3 million TB-related deaths per year worldwide.

People with AIDS, cancer, malnutrition, chemotherapy, drug or alcohol abuse are especially susceptible to developing active TB. The risk of infection is also related to the patient's genetics, with some groups of blood antigens offering partial immunity. TB rates and deaths are greatest in the developing world, and TB is one of the leading causes of death in people infected with HIV. In the United States, TB rates increased during the early years of the HIV epidemic, but have since declined, and are in fact the lowest they have been since surveillance began in 1953. However, TB still affects tens of thousands of Americans, and kills several hundred per year. Antibiotic-resistant TB is a major problem in states with high levels of immigration from Eastern Europe, since these strains are particularly common in these countries. 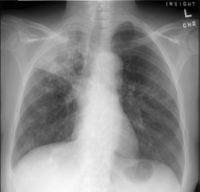 X-Ray of patient with active TB in right upper lung

Tuberculosis can affect any organ in the body, but the primary disease is in the lungs. TB is spread by aerosols produced by coughing, or by prolonged contact with someone with active pulmonary TB. This most often occurs in household contacts, or in people who work with an infected person in a workplace with poor ventilation.

Latent TB is usually treated fairly easily with one to two types of antibiotics, depending on local resistance patterns. The treatment often lasts up to a year, since the nodules surrounding the bacteria protect them from antibiotics in the bloodstream.

Active TB usually requires hospitalization and treatment with multiple medications. Given that the treatment regimen is lengthy and complicated, Directly Observed Therapy (DOT) is often recommended. There have been many legal and ethical issues involving involuntary isolation of non-compliant patients with active TB.

Multi Drug Resistant TB (MDR-TB): Certain geographical areas have seen rises in "MDR-TB". This is especially a problem when patients are intermittently-compliant with their therapy, as the bacteria develops drug-resistance. These drug-resistant strains are also more virulent and spread rapidly.

The word tuberculosis derives from the Latinate tuberculum, meaning root vegetable (French tubercule, Spanish and Portuguese tubérculo, Italian tubero). The disease primarily afflicted poor people, who had a diet reliant on cheap root vegetables such as potatoes and turnips, so it was mistakenly thought the disease was harbored in such vegetables. It is now known that the squalor of poverty simply created unsanitary conditions that fostered the spread of the disease.

Historical figures who died of Tuberculosis