From Conservapedia
(Redirected from Incas)
Jump to: navigation, search 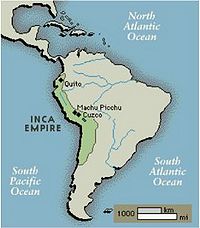 The greatest extent of the Incan Empire.

The Inca civilization, which lasted from roughly 1250 to 1548 AD, was the largest empire of Pre-Columbian America until it was destroyed by Spanish imperialists. The Inca are best known for their highly advanced road system, surprisingly accurate medical knowledge, and calendar. The famous Machu Picchu is an Incan ruin.

History of the Inca

The Inca began as a small tribe called the Killke in the so-called "Sacred Valley" of modern-day Peru. Particular geographic conditions made the Sacred Valley especially fertile and well-protected, allowing the tribe that would become the Incan Empire to become more powerful than neighboring tribes over time, and by 1200 AD the Inca had founded the city of Cuzco, which would become their capital city.

In a series of tribal conquests, the Inca conquered all of modern-day Peru and extended their empire across the Andes mountain range. The Inca inspired the loyalty of subjugated peoples by allowing them to maintain their local deities, and by training local tribe members as administrators. The height of the empire was from 1471-1525, when it covered almost the entire Andes mountain range.

Culture of the Inca

Machu Picchu is the classic example of Incan culture. This holy city was not designed for permanent inhabitation, but appears to have fulfilled a religious role in Incan society.

The Andes are poor in metals, and so the Inca never developed past the Bronze age. This is not to say their technology was not advanced. Although the sacred valley was unusually fertile, the Andes overall were not fertile, and so the Inca developed terracing, a method of farming the barren mountain sides. Another important Inca technology was the Quipu, which were assemblages of knotted strings used to record information, the exact nature of which is no longer known.

Collapse of the Inca

In 1526, 182 Spanish Conquistadors commanded by Francisco Pizzaro reached Incan territory and began to recruit from the tribes conquered by the Inca. Smallpox, accidentally introduced by the Spaniards, decimated the Incan population and killed the Emperor Huyana Capac. In 1532, his successor, Atahualpa, was kidnapped and later executed by the Spaniards, ending the administration of the Incan Empire. By 1572, the revolting Incans had subsided and the territory came under Spanish rule.

The descendants of the Inca are the Kichwa (Quechua) and Aymara ethnicities. There are approximately 10 million Kichwa living in Peru, Bolivia, and Ecuador, making them by far the largest surviving indigenous American ethnicity. (The Maya are next with just over 6 million.) The largest Inca minority was the Aymara, who today number around 1.6 million in the same region. These two groups and several smaller ones are at the bottom of the socioeconomic ladder in the Andes and are involved in frequent agitations and uprisings in the region, particularly Bolivia. These problems stem from issues such as runaway inflation on gas prices and water privatization, which in turn raise prices to prohibitively high levels.