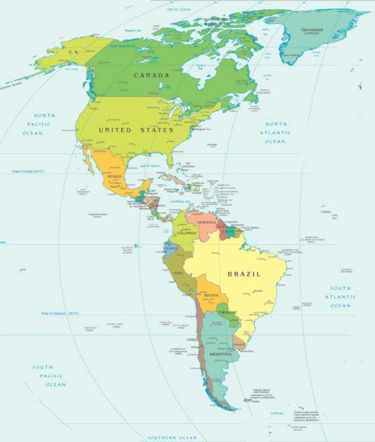 The word "America" is often used in American English to refer particularly to the United States of America. When speaking English, Latinos (particularly Mexicans) distinguish between Latin America and North America, with Mexico specifically excluded from North America.

The most common origin given for the name America is derived from that of the Italian merchant and navigator Amerigo Vespucci, one of the earliest European explorers of the New World. However, a competing theory has been put forward by Dr. Basil Cottle that America may have been named after a senior collector of Customs at Bristol, Richard Amerik, who was also one of the chief investors in the second transatlantic voyage of John Cabot (the first recorded European to set foot on American soil in May 1497),.[1] How reliable each theory is is open to question as there are no contempory documents of the time that detail how the name America was arrived at.

America is also understood as one of the five continents of the globe, with an area of 16,000,000 square miles, and been larger than Europe and Africa together. Its length from the northern limit of Alaska to the southern limit of Chile is 8,700 miles.