Oklahoma is located in the Southern region of the United States (though it is considered as much Midwestern as it is Southern) and on November 16, 1907 became the forty-sixth state to enter into the union. The capital of Oklahoma is Oklahoma City, which is also its largest city. According to the 2000 Census, the state's population was 3,450,654 people.[1]

Located in the Bible Belt, Oklahoma has one of the most conservative populations in the Nation, but as in Tennessee the elected officials tend to be more liberal than the people. The Republican Party holds all statewide offices, supermajorities in both chambers of the Legislature, both United States Senate seats and all five United States House of Representative seats.

The most famous personality was Will Rogers, a cowboy celebrity and humorist of the 1920s.

The state Constitution of Oklahoma, like all of the other 50 states, acknowledges God or our Creator or the Sovereign Ruler of the Universe. It says:

Invoking the guidance of Almighty God, in order to secure and perpetuate the blessing of liberty; to secure just and rightful government; to promote our mutual welfare and happiness, we, the people of the State of Oklahoma, do ordain and establish this Constitution.

The written history of Oklahoma began in 1541 with the Spanish travel journals of the Coronado expedition. Two groups of Native Americans lived in the region: the nomadic, bison-hunting Plains groups (Kiowas, Comanches, and Kiowa-Apaches) and the sedentary, agricultural Caddoan-speaking groups (Wichitas and the Caddos). In 1803 Thomas Jefferson purchased the region from France in the Louisiana Purchase. A few U.S. Army officers, naturalists, adventurers, traders, and missionaries visited the area.

Starting in 1820, the federal government started using the region to resettle tribes relocated from the Southeast. The tribes received federal subsidies in terms of food and supplies. Named the Indian Territory, it became home to over sixty tribes. The largest were the "Five Civilized Tribes," (Cherokee, Choctaw, Chickasaw, Creek, and Seminole). Intermarriage with whites had produced a modernizing leadership class that adopted American ways, often in the face of resistance from traditionalists. Christian missionaries were active with all the tribes, and were increasingly successful in converting them. In 1830, Andrew Jackson had Congress pass the Indian Removal Act giving the Army power to forcibly remove the tribes to their new territory. Exposed to disease, lack of supplies, and emotional distress, there was great suffering during the removal; the ordeal is called the Trail of Tears. Apart from missionaries and a few federal agents, the population was entirely Native American at this point.

At the outbreak of the Civil War in 1861, federal agents abandoned Indian Territory. The Confederacy moved in and negotiated treaties with the Five Civilized Tribes. The tribes owned black slaves, which they fought to keep. The Confederacy paid the subsidies the U.S. government had paid, permanently guarantee their lands and their right to tribal self-government, and provide military protection and guns. The Cherokees and Choctaws were authorized to send a delegate to the Confederate Congress, with the prospect of eventually become a Confederate state.[1]

Going to war against the United States proved to be the downfall of Indian independence. The Five Tribes were punished and forced to cede their lands in western Oklahoma to new tribes that were moved in, including the Arapahoe, Kiowa, Apache, Wichita, Caddo and Osage. By 1885, 45 new tribes had relocated to Indian Territory. Cattle drives brought large herds from Oklahoma and Texas across the state to railheads in Kansas, making Oklahoma synonymous with the cowboy. The new treaties granted the railroads the right to lay track across Indian Territory and by 1905, 5,231 miles of track had been laid and the cattle drives had ended.[3] 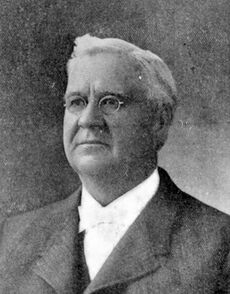 Portrait of Judge J. R. Thomas, who notably gave the death sentence to white settlers in Indian Territory who tortured and murdered Seminoles. Railroads brought new economic opportunities, and for the first time led to an influx of white settlers; soon the Indians were outnumbered. Hunters (both white and Indian) slaughtered the buffalo (bison) herds, a primary food source of some tribes. Crime and lawlessness became rampant. The tribes appealed to the federal government for help, which was granted in 1871 with the establishment of a federal court to deal with issues in the territory. This new court usurped the power of less powerful Indian courts. The Dawes Act of 1887 gave Indians title to land individually (rather than tribally), and they started to sell it off.

By the 1880s many Americans were looking for a new start and sought to use the Homestead Act as the legal right to settle the unassigned lands in Oklahoma. The federal government unsuccessfully attempted to disallow this. Eventually the government relented and the Land Run of 1889 opened the lands of Oklahoma to white settlement on April 22, 1889. Over 50,000 homesteaders arrived and at noon raced to claim 160 acre homesteads. Those settlers who made an illegal head start were called "sooners".[4]

Gradually more reservations were opened up as whites bought parcels of lands from Indian owners and formed farm and ranching settlements. The western part was separated and named Oklahoma Territory; a territorial government was formed by Congress in 1890. Cities sprang up overnight, including Oklahoma City, Stillwater, Kingfisher, Edmond, and Guthrie. Guthrie became the new capital of Oklahoma Territory, in the west, with Indian Territory in the east.

The combined population reached 1 million, but they resisted being joined together and desired to be admitted to the United States as separate states. Indian Territory had even gone to the lengths of creating a constitution to form a new state named Sequoyah. The Roosevelt administration had no desire to see this happen, as he was a Republican and Indian Territory would have almost certainly been a Democrat stronghold. Congress in 1906 authorized a constitutional convention to merge the two territories. The convention and early government was dominated by Democrats. The State of Oklahoma was officially admitted to the Union on November 16, 1907, with a democratic constitution that prohibited liquor, established Jim Crow laws, provided for the initiative and referendum, created strong county governments, regulated railroad rates, and limited the governor to one elected term.

The early years of statehood were marked with political activity. In 1910, the Democrats moved the capital to Oklahoma City, three years before the Oklahoma Organic Act allowed, in order to move away from the Republican hotbed of Guthrie. Socialism became a growing force among struggling farmers, and Oklahoma grew to have the largest Socialist vote in the United States at the time, with the Socialist vote doubling in every election until the outbreak of World War I in 1914.[5] However, the war drove food prices up, allowing the farmers to prosper, and the movement faded away. By the 1920s, the Republican Party, taking advantage of rifts within the Democratic Party, gained control in the state. The economy continued to improve in the areas of cattle ranching, cotton, wheat, and especially oil. Since 1952, Oklahoma has voted for the Republican Party in presidential elections with the exception of the Barry Goldwater nomination in 1964.

The Republican Party dominates the state in every level of government and the state is very conservative. In the 2016 election, voters approved a referendum strengthening the legal position of the death penalty by amending the state's constitution to specifically state that it is not cruel or unusual punishment, with 61.2 percent in favor.[6][7][8] In May 2017, the Oklahoma House of Representatives passed a resolution declaring abortion murder and criticizing the Supreme Court for its role in legalizing the practice.[9] In February 2019, Oklahoma's governor signed a Constitutional carry bill into law.[10][11]

Throughout the 1920s, new oil fields were continually discovered, and Oklahoma produced over 1.8 billion barrels of petroleum, valued at over 3.5 million dollars for the decade.[12] In 1920, the spectacular Osage County oil field was opened, followed in 1926 by the Greater Seminole Oil Field. During the Great Depression Oklahoma and Texas oil was flooding the market, and prices fell to pennies a barrel. In 1931 Governor William H. Murray, acting with characteristic decisiveness, used the National Guard to shut down all of Oklahoma's oil wells in an effort to stabilize prices. From the 1930s to the 1970s, oil producing states enacted conservation laws which limited the amount of oil that could be produced from wells. In practice, the Texas Railroad Commission set production quotas (called "allowables") in Texas, which raised prices as well for Oklahoma crude. However, there are so many oil pipelines and oil storage facilities near Cushing, Oklahoma, that from that time until the present, the spot price of oil in Cushing is used as the trading benchmark for mid-continental oil generally.

The combination of the Great Depression and the Dust Bowl put an end to economic prosperity in the 1930s. Farmers were hit the hardest and many relocated to the cities. Others, called "Okies", began a mass migration of to California in search of a better life, an image that would be popularized in American culture by John Steinbeck's novel, The Grapes of Wrath and Henry Fonda's movie. The economy recovered during World War II, when conservative Governor Robert S. Kerr utilized friendships in Washington to secure federal money to help the state recover. Oklahoma built and expanded numerous army and navy installations and air bases, which in turn brought thousands of jobs to out of work citizens. By the 1950s Oklahoma was prosperous and growing.