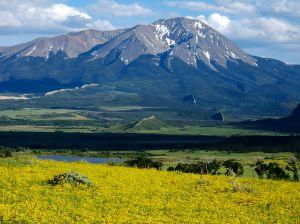 Colorado became the 38th state of the United States with its admission to Statehood on August 1, 1876. It is known for its skiing and snowboarding resorts, such as Vail and Aspen in the Rocky Mountains, which run north-south through the state. In the mountains and plains the winters are usually very cold and produce many snowstorms. However, along the front range (where Denver, Boulder, Colorado Springs, Pueblo, Greeley and most large cities are located), the weather is more mild and is very sunny.

The state Constitution of Colorado, like all of the other 50 states, acknowledges God or our Creator or the Sovereign Ruler of the Universe. It says:

We, the people of Colorado, with profound reverence for the Supreme Ruler of the Universe, in order to form a more independent and perfect government; establish justice; insure tranquility; provide for the common defense; promote the general welfare and secure the blessings of liberty to ourselves and our posterity, do ordain and establish this constitution for the "State of Colorado."

A number of Colorado cities are located near the Front Range of the Rockies, at elevations of around 5,000 feet. Denver, its capital and largest city, is sometimes called "The Mile-High City", because the official elevation of Denver City Hall is exactly 5,280 feet.

At elevations of 5,000 feet, the air is thinner and air pressure is lower than at sea level. It is not unusual for visitors to feel lightheaded for a day or two until they adjust (but actual altitude sickness is very rare). At this altitude, skies are a clearer, brighter blue than at sea level. At that elevation, water boils at only 203 degrees F, compared to 212 degrees at sea level, so cooking recipes have to be modified.

The Native American (Indian) groups indigenous to Colorado were the Anasazi and Utes who lived in the mountainous regions, and several tribes who lived in the flatlands and near the rivers at various times including the Cheyenne, Arapaho, Kiowa, Comanche, Pawnee and Sioux.[1]

It is believed that in 1541 the Spanish explorer Francisco Vázquez de Coronado was the first European on record to have entered the land that is now Colorado.[2] The Spanish called the area Colorado because of its red colored earth.[3]

The United States acquired part of what is now Colorado in 1803 through the Louisiana Purchase. In 1848 Mexico ceded claims to the rest of it. There were no European settlers or forts. Before gaining statehood, Colorado was part of the Nebraska, Utah, Kansas, and New Mexico Territories, and in 1861 Congress created the Territory of Colorado. The state now encompasses 104,247 square miles.

The state is bordered by Wyoming, Nebraska, Kansas, Oklahoma, New Mexico, and Utah. The population of Colorado is approximately 4,750,000.

Colorado has many official state symbols including:[4]