The Seminole tribe is a Indian tribe that now is based in Oklahoma. The tribe began in the 1750s as refugee Creeks and other Indians moved from Georgia into Florida, where they destroyed the original Florida tribes. The Seminoles adopted many runaway black slaves. The name Seminole is a Creek word, borrowed from the Spanish "cimarrón", meaning a runaway, or a savage. 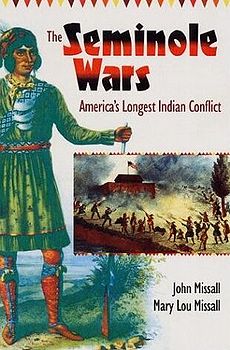 The Seminoles were one of the Five Civilized Tribes[1] who adapted to American standards of technology and economics.

Florida was owned by Spain, which exercised little control and allowed it to become a refuge for runaways and from Creek Indians after their defeat in the Creek War in 1814. In 1817 U.S. General Andrew Jackson invaded Florida to stop Seminoles from aiding and providing refuge for the Creeks who were raiding American settlers of Georgia. In this First Seminole War many Seminole settlements were burned and the raids ended. Spain ceded Florida to the United States in 1819, and the Seminoles agreed to stay on new reservations.

In 1832 the Seminoles agreed to be removed to "Indian territory" (now Oklahoma), but before the move was completed a group led by a warrior named Osceola revolted in 1835. Osceola was captured, but the Second Seminole War continued until 1842.

In November 1835, hostilities flared up on the Florida peninsula. In December, General Duncan L. Clinch ordered Dade's troops to reinforce the garrison at Fort King. A six-day march from Fork Brooke, near modern Tampa Bay, took the soldiers through a Seminole reservation where all but two of the troopers were killed. Over the next eight years, nearly four thousand soldiers and Indians died in the conflict.

The usual techniques for defeating the Indians worked poorly in Florida. The U.S. Army could not find Indian allies because the Seminoles had killed off the other tribes. Waiting for winter to attack food stores did not work in Florida's hot climate. Progressively narrowing the hostile territory by building forts was futile since Florida was so large and had so many swamps.

At the end, 3000 Seminoles went to Oklahoma, but a thousand or so held out against the Army in the Everglades for years during the smaller-scale Third Seminole War.

John Cavallo (b. 1812?), son of a Seminole chief and an African mother, was a Seminole, 1835-42. Cavallo's charismatic leadership led to his reputation among white leaders as a primary source of Indian and black resistance. After his surrender, Cavallo, also known as Gopher John and later as John Horse, served the U.S. Army as an interpreter during efforts to gather over five hundred Indians for exile. John Horse later drew from his experiences with the army in Florida to help establish the African-American US Cavalry regiments known as the "Buffalo Soldiers". They were used in western outposts to keep Indians on reservations.[2]

Today there are about 3,000 Seminoles in Oklahoma, mostly living as farmers. There are 700 or so Seminoles in Florida.