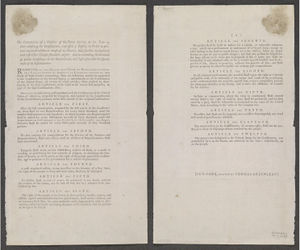 The Bill of Rights as originally proposed contained the following description as "declaratory and restrictive clauses".

Incorporation is a legal doctrine applied by the U.S. judicial system which applies the liberties and protections of Bill of Rights in the jurisdiction of the state and local governments. This means the same limitations which apply to laws written and executed at the federal level must also be observed by lower level governments. For the first 150 years of constitutional interpretation, the Bill of Rights applied against only the federal government. Incorporation is only an interpretation of the U.S. Constitution and is not institutionalized, meaning incorporation is not written into the legal framework of the government rather it has been interpreted into the framework by justices on the U.S. Supreme Court. This means that rights could be unincorporated though this is unlikely due to the tradition of legal precedent.

The earliest cases involving discussions of incorporation were a series of three cases: Hurtado v. California (1884), Maxwell v. Dow (1900), and Twining v. New Jersey (1908).[2][3] These cases, however, were declined by the court.[4] Additionally, in the case of Hurtado, the question was not posed as to whether or not to consult with the Fourteenth Amendment, additionally putting it outside of the official scope of Incorporation Doctrine enactment history.[5]

Regardless of the question posed in any of these cases, Justice John Marshall Harlan insisted in inserting his preference for incorporation into all three via his dissents, marking them as the first cases[6] in which incorporation as a doctrine was in front of the Supreme Court.[7][8]

The first piece of the Bill of Rights to be incorporated was just compensation of the Fifth Amendment in 1897 in the case Chicago, Burlington & Quincy Railroad Co. v. City of Chicago. The writer of the majority opinion in that case was Justice Harlan, joined by 6 other justices. The last amendment to be incorporated was the Second Amendment in the 2010 case McDonald v. Chicago. Another important early Incorporation case was Gitlow v. New York.[5]

Another theory to incorporation is use of the Privileges and Immunities Clause also embedded in the text of the Fourteenth Amendment. This was used by lawyers during the Slaughterhouse Cases in the 1870s but without success because the Court choose to read this provision with the legislative intent as applying only to freed slaves. In his concurring opinion in the 2010 case McDonald v. Chicago, Justice Clarence Thomas argues that the Privilege and Immunities Clause should be revisited as the proper vehicle through which the Bill of Rights is incorporated.[9]

Historically the doctrine has been interpreted as selective incorporation. Not every right in the Constitution applies to the state and local governments. The Supreme Court has evaluated arguments on a case-by-case basis to determine the necessity of incorporating the right in question. Justice Hugo Black was a leading proponent of total incorporation: the idea that the entire Bill of Rights should be incorporated en bloc through the Due Process Clause of the Fourteenth Amendment.

Since its inception, the doctrine of incorporation has been a controversial one.[11] Originalists and some historians note that the Bill of Rights was originally designed to only limit the Federal government, whereas the states have their own Bills of Rights outlining their own limitations. Judge Bork notes in his book The Tempting of America that the statesmen in the mid 1800s who framed the 14th amendment did not have in mind for that amendment what the courts have done since. He wrote:[12]

(It is not) easy to imagine the northern states, victorious in a Civil War that lead to the fourteenth amendment, should have decided to turn over to the federal courts not only the protection of the rights of freed slaves but an unlimited power to frustrate the will of the Northern states themselves. The only significant exercise of judicial review in the past century had been Dred Scott, a decision hated in the North and one hardly likely to encourage the notion that courts should be given carte blanche to set aside legislative acts. ... Had any such radical departure from the American method of governance been intended, had courts been intended to supplant legislatures, there would be more than a shred of evidence to that effect. That proposal would have provoked an enormous debate and public discussion.

He concludes by writing:

We know there is no evidence that the ratifiers imagined they were handing ultimate governance to the courts. We know that a constitutional revolution of that magnitude would have provoked widespread and heated (to put it mildly) discussion but there is no record of any such discussion. The rather sweeping mandate must be judged counterfeit.

Former Attorney General Ed Meese has also been critical of the doctrine.