Indian painting is an old tradition; its history goes back to antiquity. Indian Painting shows many different styles, generally classified as murals and miniatures, and movements like Mughal, Pahari, Mysore, Tanjore, Madhubani, Bengal School, and Samikshavad, the first in modern India. Chinese and Iranian art had inspired Indian artists. Western influences also had an impact on Indian modern art like "the Company style". Modern Painting has changed from mystery and Hindu gods to subjects with inspiration in present social and economical problems; still, the respect for tradition and the ability to transcend it at the same time is clearly evident in Indian art of today. [1]

Miniature painting include literature on the Hinduism, Buddhism and Jainism.

At first glance, an Indian miniature painting, to the uninitiated, appears nothing more than a clutter and tangle of pastoral settings, dominated by masculine and feminine figures. Yet these scenes are not detached visions of artistic expression but provide the basis of Indian music and art forms. [2]

Some important Indian painters are: Manaku of Guler, Hemen Majumdar, Abanindranath Tagore, Raja Ravi Varma, Jamini Roy, Ram Chandra Shukla, M. F. Hussain, Anjolie Ela Menon and Rameshwar Broota. The painter Manaku is seen as having been central to the development of the Pahari style of painting at Haripur/Guler during the second quarter of the 18th century. [3] Raja Ravi Varma is most remembered for his paintings of beautiful sari clad women, who were portrayed as very shapely and graceful. He is famous for his depiction of scenes from the epics of the Mahabharata and Ramayana. [4] The paintings of Jamini Roy (1887-1972) are among the most recognizable of Indian paintings. [5] His works have been declared as national treasures of India. [6] Maqbool Fida Husain (1915 - 2011), who was known simply as M.F. Husain, was called India's Picasso; his paintings and even his simple pencil drawings became status symbols for India’s wealthy elite, with his works commanding price tags running into millions of dollars. Husain was considered a master of color and lines, with works inspired by Hindu temple art and cubism. His paintings could be a jumble of monkeys, elephants, and horses from Indian folk tales and Hindu mythology, but his favorite subject was woman as giver of life and love.[7] In India, his talent earned him the Padma Bhushan in 1973, the Padma Vibhushan in 1989, and a nomination to the Rajya Sabha in 1986. [8]

Bhanwar G. Sharma (1924 - 2007), an award-winning painter, is famous for his Indian miniature and religious paintings; he made a huge contribution to advancing the Mughal, Kishangarh, and Kangra painting styles. His paintings have illustrated several books as well as calendars 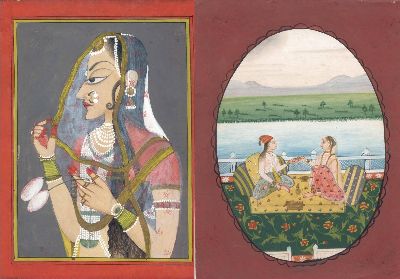 Shakuntala by Raja Ravi Varma. (One of the most renown Indian paintings)