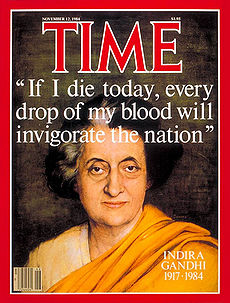 Her charisma as the daughter of the founder of independence Jawaharlal Nehru, her secularist outlook, her identification with the poor, her commitment to sociliasm, and her image as a strong national leader had made her the only politician of all-India stature acceptable across regional, religious, caste, and class lines. Mrs. Gandhi was devoted to national unity, secularism, self-reliance, reduction of economic disparities, and—usually—to democratic processes. She repudiated the methods of Marxist class struggle and thus strove to combat India's poverty without changing the structure of society. She was willing to use coercive measures if necessary, however, to achieve economic progress and social reform; she defended the emergency, for example, as necessary to protect the economy from the disruptive activities of the opposition and to assure the poor the benefits they were entitled to as equal citizens under the law.

In foreign affairs during the Cold War, Gandhi relied on good diplomatic relations and with the Soviet Union to protect India against a possible U.S.-China-Pakistan alignment. She purchased modern arms from the Soviets, which made possible her greatest achievement, the quick, decisive victory by the Indian army in the 1971 war with Pakistan. Victory ended the refugee crisis and led to the creation of independent Bangladesh from the former East Pakistan. She was sympathetic to liberation movements in the third world and often supported neitral movements.

She was the only child of Congress Party leader Jawaharlal Nehru, who became India's first prime minister following independence in 1947.

Indira Nehru was educated in India and Switzerland and attended Oxford University briefly. Returning to India in 1941, she married a Parsi lawyer, Feroze Gandhi (no relation of Mohandas K. Gandhi). After India's independence Mrs. Gandhi became her father's official hostess. Gradually she became a political figure in her own right, and in 1959 she was elected president of the ruling Indian National Congress. She stepped down in 1960 after her husband's death but continued as an aide to her father. In the years before his death in 1964 she acquired increasing importance as an intermediary between the ailing prime minister and his government and party officials. She became minister of information in 1964 and was chosen prime minister in 1966 on the death of Nehru's immediate successor, Lal Bahadur Shastri.

Intense political factionalism prevailed her first term as prime minister, 1966-71. Conservative elements who had supported her election - thinking she could be "molded" to their will - fought back bitterly (but unsuccessfully) when she proved to be an ardent defender of Nehru's liberal political philosophy. In 1969, after her government nationalized 14 of India's largest banks, conservative older leaders of the Congress Party tried to expel her from the party. The attempt failed, but it caused a split into a ruling Congress (R) and an opposition Congress (O). Mrs. Gandhi called for socialist economic and social reforms, while her conservative opponents, called the Syndicate, advocated more capitalism as the solution to the nation’s massive poverty. Cooperating with other conservative parties, the Syndicate weakened Gandhi's popular programs by threatening the parliamentary majority of the Congress party. Mrs Gandhi responded by closer links with leftist parties. Gandhi was left without a majority in parliament; but she boldly called elections a year early, and in March 1971 her Congress (R) scored a smashing victory, polling more than two thirds of the vote.

Considerable real economic growth took place, often in spite of or contrary to her proposals. Prosperity enabled Mrs. Gandhi to win a landslide reelection victory in 1971. It partly resulted from her reputation for strong leadership, and also resulted from the effects of the New Economic Policy, implemented in 1966. After hesitant beginnings in the early 1960s the Green Revolution rapidly improved food production and spurred the entire economy after 1967. She nationalized India's banks in 1967 to allow for easy credit. Social discontent resulting from the Green Revolution was still limited.

In foreign policy she led the nation to a triumphant victory in a major war with Pakistan in 1972. It resulted in the independence of Bangladesh, which had revolted over the widespread mistreatment by Pakistan. Mrs. Gandhi's pragmatic, coldly calculated friendly relationships with the Soviet Union and her hostile attitude toward the United States left India a more important and independent regional power than it had been under her father. Her nuclear policy was characterized by the refusal to sign the Nuclear Non-proliferation Treaty, insistence on the further development of peaceful uses of atomic energy, and maintenance of a nuclear technological capability in response to developments in Pakistan and China.

In 1975, beset with deepening political and economic problems, Mrs. Gandhi declared a state of emergency and suspended many civil liberties. Although India had a strong tradition of democracy, that tradition was challenged when Mrs. Gandhi moved toward a personal dictatorship. In the summer of 1975, following a long siege of political invective and legal reverses, she arrested her chief critic Jayaprakash Narayan and thousands of his political supporters and suspended the constitution under the Defence of India Rules. She said the drastic action was necessary to preserve national unity. Mrs. Gandhi then issued edicts to curtail rising prices, improve the efficiency of government, and control crime and violence. The opposition, however, maintains that these things were accomplished only at the price of higher unemployment, increased government bureaucracy, and growth of hoarding, smuggling, and black marketeering. The newspapers of India were suppressed by heavy censorship rulings and the laws regarding the office of prime minister were altered to virtually ignore the role of the Indian Parliament.

Seeking a mandate at the polls for her policies, she called for elections in 1977, only to be defeated by Morarji Desai, who headed the Janata Party, an amalgam of five opposition parties. In January 1978 she engineered another split in the Congress; her Congress-I (for "Indira") scored successes in state elections the following month, and in November Mrs Gandhi herself won election to parliament.

In 1979, Desai's Government crumbled. Charan Singh formed an interim government, which was followed by Mrs. Gandhi's return to power in January 1980. Since the early 1970s she had been grooming her son Sanjay Gandhi, a forceful and controversial politician with strong support among urban youth. She suffered a severe personal and political loss when Sanjay died in an airplane accident. She then persuaded her older son, Rajiv, to enter politics as her main deputy.

In 1980 she regained power. When the Sikhs demanded an independent state and engaged in a violent campaign against the government, she ordered an attack on the Sikh's holiest site, the Golden Temple, where the insurgents were based. In response, two of her Sikh bodyguards retaliated by assassinating her in November 1984. The killing was followed by a nationwide outburst of violent attacks on Sihks. Her son Rajiv Gandhi, was chosen by the Congress (I) Party to take her place. His government was plagued with allegations of corruption resulting in an early call for national elections in 1989.