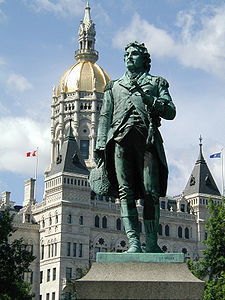 Major-General Israel Putnam (1718-1790) fought in both the French and Indian War and American Revolutionary War. During the French and Indian War, Putnam served as a major in the British army. He was captured by the Indians and tortured. However, he was rescued, and, in 1762, he led a Connecticut regiment in an unsuccessful expedition against the French in the West Indies. In the American Revolution, he was an American patriot, and he participated in the battles of Lexington and Bunker Hill.

Putnam is sometimes credited with the famous quote, "Don't shoot until you see the whites of their eyes!" during the Battle of Bunker Hill, but some historians credit Colonel William Prescott instead.[1]