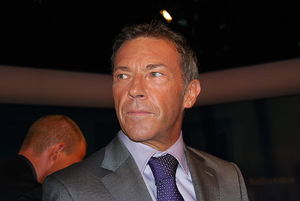 Jörg Haider (January 26, 1950—October 11, 2008) was a right wing Austrian politician. He led the Austrian Freedom Party (FPÖ) from 1986 to 2000 and the breakaway Alliance for the Future of Austria (BZÖ) from 2005 until his death in 2008. In addition, he served as the governor of Carinthia from 1989 to 1991 and again from 1999 until his death. After his death, his liberal enemies spread rumors about him to have been homosexual or bisexual, although Haider has a wife and children.

In 1986, Haider became the chairman of the national Austrian Freedom Party.[1] Prior to his chairmanship, the FPÖ had weak electoral performance.[1] In addition, although there were liberal and nationalist factions in the party, it had sided with the liberal faction in the recent years, being a member of Liberal International and cooperating with the Social Democrat-led government.[3][4] Haider shifted the party to the right, and during his tenure, the FPÖ performed increasingly stronger in elections, eventually becoming the second largest party in the country.[1]

After the FPÖ made a strong second-place finish in the popular vote in Carinthia, Haider was elected governor of the state in 1989.[1] He served until 1991, when he had to resign after making positive remarks concerning the Third Reich's employment policies.[1][3] Despite this, the FPÖ continued to increase in power, and Haider was re-elected governor in 1991 and would serve until his death in 2008.[1]

In the 1999 national elections, the FPÖ received 27% of the vote, a second-place finish and the party's best result at the time.[1] The party performed better than the moderate-conservative Austrian People's Party (ÖVP), and after failed coalition talks with the Social Democratic Party (SPÖ), the ÖVP formed a coalition with the FPÖ.[1] Because of controversial statements Haider had previously made related to Nazi Germany, Israel recalled its ambassador from Austria.[5] The decision to form this coalition also shocked the liberal European political establishment, and Haider had to resign as party chairman, despite remaining politically involved.[1]

In 2002, Haider met with the Iraqi dictator Saddam Hussein, something that caused him to receive much criticism.[6][7] Shortly after the meeting, Haider announced he would withdraw from Austrian politics.[8] After his death, allegations arose that he accepted £40 million from Hussein and Muammar al-Gaddafi of Libya.[9]

Split from the FPÖ

During the governing coalition, tensions arose between Haider and his allies, who were becoming increasingly pragmatic, and the more radical party base.[10] The tensions cumulated in 2005, when Haider, most FPÖ MPs, and all cabinet members left the party to form the Alliance for the Future of Austria (BZÖ).[4][10]

The BZÖ performed well, receiving 11 percent of the vote in the 2008 elections.[1]

On October 11, 2008, Haider died in a car accident in the town of Köttmannsdorf in Carinthia.[1]

After Haider's death, the BZÖ shifted towards the political center, and in 2010, many of its members rejoined the FPÖ.[4]

After Haider's death, his successor of the BZÖ claimed to have had a homosexual relationship with him, even though Haider was married.[11] Haider's wife, Claudia, later won a court case which barred the media from calling him a homosexual.[12]