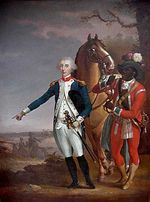 Armistead standing next to General Lafayette

James Armistead Lafayette was a double-agent spy during the American Revolution. Thinking he had given up on the Americans, the British took him in and while in their confidence, he overheard the plans of their military commanders. He would bring these details back to the colonists where they could gain an advantage.[1]

Armistead was born into slavery, under the ownership of William Armistead.

He enlisted in 1781, serving under Marquis de Lafayette.[2] It was Lafayette who worked on his behalf toward emancipation, to which Armistead would add 'Lafayette' to his name, in honor of the General. Lafayette wrote of Armistead:

This is to certify that the bearer by the name of James has done essential services to me while I had the honour to command in this state. His intelligences from the enemy’s camp were industriously collected and faithfully delivered. He perfectly acquitted himself with some important commissions I gave him and appears to me entitled to every reward his situation can admit of.