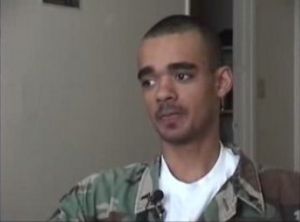 Jesse MacBeth was an individual who gained a level of infamy by doing a 2005 video interview which was posted throughout the world on sites such as YouTube, claiming to have been a member of the United States Army's Rangers recovering from wounds received in Iraq; dressed in his battle uniform, he claimed that he was made to kill civilians and had participated in war crimes. Subsequent research into the matter proved that not only was MacBeth never in Iraq, he was discharged from the Army after six weeks in boot camp at Fort Benning, Georgia, in 2003 because of his “entry level performance and conduct.” MacBeth's claims and subsequent exposure as a fraud resulted in the phrase "phony soldier" being applied to him as well as those who made similar claims.

MacBeth stated he committed war atrocities, such as killing civilians indiscriminately. He claimed to have been wounded in one of these battles and to have received the Purple Heart. Mistakes surfaced from the video interview, such as the photograph of him in uniform with the flag as a background (at the beginning of the video), showing his sleeves rolled up in Marine Corps fashion rather than by Army regulations, as well as a lack of proper insignia worn by qualified Rangers [1]. His uniform further bears the insignia on his collar of a second lieutenant, a commissioned officer. This video was used by an organization calling itself Iraq Veterans Against the War (IVAW) and claimed to be a genuine account of war crimes.

Conservative radio talk show host Rush Limbaugh was condemned by the mainstream media for exposing MacBeth for what he was, a "phony soldier;" this condemnation also included statements from the floor of the United States Senate, such as one by Senator Tom Harkin.[1]

Conservative pundit Michelle Malkin, in searching for confirmation that MacBeth was ever in the Army, received the following from Army spokesman John Boyce:

“Initial research by the U.S. Army Special Operations Command at Fort Bragg shows no Soldier with the name of Jesse Macbeth having ever been assigned to the Special Forces or the Army Rangers — which are, in fact, two separate disciplines. This appears to be some sort of hoax. No Soldier by that name at Fort Lewis to our knowledge, in the past, either. Of course, the line about “go into the Army or go to jail” is vintage TV script not heard since the 1960s. There are also numerous wear and appearance issues with the Soldier’s uniform — a mix of foreign uniforms with the sleeves rolled up like a Marine and a badly floppy tan beret worn like a pastry chef. Of course, the allegations of war crimes are vague, as are the awards the Soldier allegedly received.” [2]

MacBeth was arrested in May 2007 by Federal authorities and charged with fraud in connection with unlawfully receiving more than $10,000 in medical benefits from the Veterans Administration. Interviewed at the Pierce County Jail in Washington State, where he was being held on an assault charge, MacBeth stated that he collected the money and benefits to "sucker" from the government as much as possible.[3] On June 7, 2007, MacBeth pleaded guilty to one count of making false statements to the United States Department of Veterans Affairs.[4] MacBeth was sentenced September 21, 2007, to five months in jail and three years probation.[5]