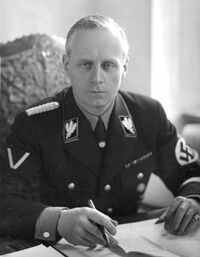 Joachim von Ribbentrop (April 30, 1893 - October 16, 1946) was Foreign Minister of Germany during World War II and was hanged on October 16, 1946 after being convicted of and war crimes and Crimes Against Peace by the Nuremberg War Crimes Tribunal.

Ribbentrop (who only adopted the aristocratic 'von' prefix to his surname in 1925) was born in Wesel, Prussia, and educated at a number of private schools in Germany and Switzerland before working for engineering companies and as a journalist in the United States and Canada. He returned to Germany from Canada just before the outbreak of World War I and served as an officer on the eastern and western fronts, being awarded the Iron Cross. Following the war he worked for a champagne company, and only joined the Nazi Party in 1932, apparently for careerist rather than ideological reasons, though once a member he adopted extreme views (even by Nazi standards) and an outspoken Anti-Semitism which he had never previously voiced. From 1936 to 1938 Ribbentrop was German ambassador to the United Kingdom, and from 1938 to 1945 was German Foreign Minister. In this role, he was responsible for negotiating the Molotov-Ribbentrop Pact of 1939, which led to the secession of the Baltic states to the USSR and partition of Poland between Germany and the Soviet Union. Territories of the former Austro-Hungarian Empire outside of Ukraine fell within the German sphere of influence.

He did however repent for his actions and told the Lutheran minister before his hanging, "I'll see you again."[1]