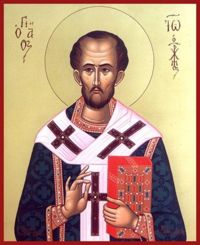 St. John Chrysostom (347 – September 14, 407) led a dignified life as a great defender of the early Church. Given the surname Chrysostom "Golden-mouth", for his eloquent sermons, some lasting for two hours. St. John was bishop of Constantinople and a great theological writer. Criticized the rich for not sharing their wealth, fought to reform the clergy, opposed simony, called for fidelity in marriage, encouraged practices of justice and charity. He was energetic and outspoken which made him a target for criticism. St. John is generally considered the greatest preacher ever heard in a Christian pulpit.[1] St. John was proclaimed the greatest of the Greek Doctors of the Church, a title given to him by Pope Pius V in 1568.

John was born in Antioch, a major city in the Roman Empire. His father Secundus was a high-ranking Syrian military officer who died shortly after his birth. He was raised by his mother Anthusa, who was a model of virtue. John was sent to the best schools of Antioch. The most famous orator of that period, the pagan Libanius, educated John in rhetoric, Greek language and literature. He was further educated in theology under Diodore of Tarsus, later known as bishop of Tarsus. He received Holy Baptism and was ordained a deacon by bishop Meletius. Four years later, Chrysostom resolved to live as an anchorite in one of the caves near Antioch. Due to declining health, he returned to Antioch after two years. In the year 386, Chrysostom was ordained priest by bishop Flavian.

Illustrating the influence of his sermons, citizens who had gone on a riotous rampage in which statues of the Emperor Theodosius and family were destroyed. The Antioch citizens were enraged by the levy of new taxes. Chrysostom preached 21 sermons in which he told the people to see the error of their ways. The sermons' lasting impression had many pagans converted to Christianity as a result. In the presence of a great assembly, John was ordained Bishop of Constantinople on 26 February, 398. The first act of the new bishop was to bring about a reconciliation between bishop Flavian and Rome. He embarked on a mission of reform. First was reform for his clergy then for the people of his diocese. John frequently preached against the unreasonable extravagances of the rich and the vanity of women. In his first year, he had built a great hospital with the money he had saved in his household.

Gainas, who was an Arian Goth, became commander-in-chief of the imperial army. He demanded one of the Catholic churches at Constantinople for himself and his soldiers. Chrysostom made so energetic an opposition that Gainas yielded. Constantinople citizens were excited and had slain a couple thousand Goths. Gaines escaped, was defeated, and slain by the Huns. Chrysostom's authority had been greatly strengthened by the firmness of character he had shown during all these troubles.

Theophilus, Patriarch of Alexandria, personally undertook to discredit John. Theophilus and other angered bishops were supported by Empress Eudoxia. Theophilus feared the growth in importance of the Bishop of Constantinople and took occasion to charge John with fostering heresy.[2] A long list of the most ridiculous accusations was drawn up against Chrysostom. John naturally refused to recognize the legality of a synod in which his open enemies were judges. After a third summons Chrysostom, with the consent of the emperor, was declared to be deposed. Fearing the people's wrath and some punishment from heaven for Chrysostom's exile, Eudoxia immediately ordered his recall. After some hesitation, Chrysostom re-entered the capital amid the great rejoicings of the people. But not long after, Eudoxia had accused John of alluding to her in his sermons against riches of imperial life. She wished to depose of Chrysostom and summoned Theophilus for the task. He wrote to Constantinople that Chrysostom should be condemned for having re-entered his see in opposition to an article of the Arian Synod of Antioch held in the year 341. They urged the emperor Arcadius to sign a new decree of exile. Arcadius signed the decree 24 June, 404 for a second time John went into exile. In the midst of his sufferings he found the greatest peace and happiness.[3] The followers of the exiled bishop made a huge conflagration destroyed the cathedral, the senate-house, and other buildings. A new bishop was installed and whoever refused to enter into communion with him was punished by confiscation of property and exile. When the circumstances of his deposition were known, the Pope and the Italian bishops declared themselves in John's favor. Emperor Honorius and Pope Innocent I endeavoured to summon a new synod, but their legates were imprisoned and then sent home. The Pope broke off all communion with the Patriarchs of Alexandria, Antioch and Constantinople. John had the consolation of knowing that the Pope remained his friend, and did for him what lay in his power. Chrysostom enemies were not satisfied with the sufferings he had already endured, and they banished him further to Pythius, at the very edge of the Empire. He died on his way there on September 14, 407.

Prayer for the departed

St. John Chrysostom, like the other great Church Fathers, taught the importance of praying for the departed. "Let us weep for these; let us assist them according to our power; let us think of some assistance for them, small though it be, yet still let us assist them. How and in what way? By praying and entreating others to make prayers for them, by continually giving to the poor on their behalf." [4]