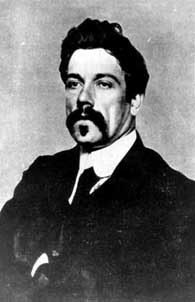 Edmund John Millington Synge (April 16, 1871 - March 24, 1909) was an Irish poet and playwright. Synge's best known work is The Playboy of the Western World. He was also a cofounder of Dublin's Abbey Theater.

Synge was born in Rathfarnham, now a Dublin suburb, the youngest of eight children. He attended private schools in Dublin and Bray, and studied at the Royal Irish Academy of Music. He earned a bachelor's degree from Trinity College Dublin in 1892. After college, Synge moved to Germany, initially intending to study music. However, doubts about his musical ability persuaded him to pursue a career in literature.

The first of his plays to be performed was The Shadow of the Glen in 1903; the play was based on folk stories Synge had collected while living in the Aran Islands. The play for which Synge is best known, The Playboy of the Western World, was first performed at the Abbey Theater in 1907. Playboy was a comedy centered on an apparent murder of a family member, and was greeted with hostility by the public. On night of the first performance, much of the audience rioted.

Synge died at 37 from Hodgkin's Disease, a form of cancer that could not be treated at the time.