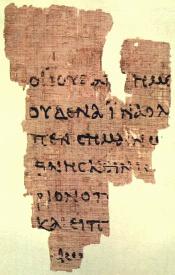 The John Rylands Fragment (P52) is the oldest known manuscript fragment of the New Testament. This papyrus codex containing John 18:31-33 and 37-38, was found in Egypt by Bernard P. Grenfell. It went unnoticed among many other manuscript fragments until 1934, when C. H. Roberts recognized that it contained part of the Gospel of John.

... This was to fulfill the word which Jesus had spoken to show by what death he would die. Pilate entered the praetorium again and called Jesus, and said to him, "Are you the king of the Judeans?"

The oldest complete Bibles are the Codex Vaticanus and the Codex Sinaiticus.