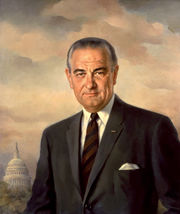 The Johnson Amendment is named after its author, Lyndon Baines Johnson.

The Johnson Amendment was an amendment to a 1954 law that provided that no church, or other institution of worship, or other non-profit organization, could engage in political activity or endorse political candidates. Churches that did this risked de-certification as public charities under Section 501(c)(3) of the Internal Revenue Code. The law was eventually revoked via Executive Order by Donald Trump on May 7, 2017, as part of an ongoing effort to undo the damages caused by Obamacare.[1]