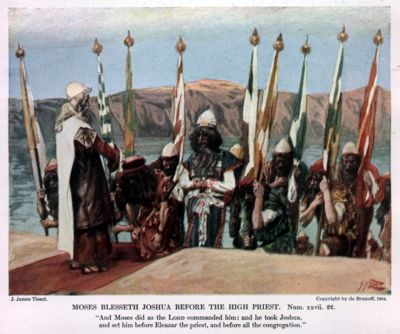 Joshua was an Ephraimite, born in Egypt, likely in 2470 AM, three years before Moses fled to Midianite country after killing an Egyptian.[2] His full name is "Joshua, son of Nun," and the Chronicler records eight generations between Joshua and his ancestor Ephraim. Joshua was probably born 179 years after Ephraim was born, thus requiring slightly more than 22 years per generation. The tribe of Judah has definite instances of generations occurring 15 years apart, so this is quite reasonable.

Joshua attracted the notice of Moses shortly after the Exodus of Israel. When Amalekite warriors attacked the Israelites from the rear at Rephidim, Moses chose Joshua to recruit an army and launch a counterattack. Moses stood on a high hill and held his rod high to invoke the blessing of God on the combat. Joshua won handily, because Moses had Aaron and Hur to hold his arms up. After that battle, God told Moses to tell Joshua to remember to destroy the Amalekites utterly at any opportunity, and furthermore told Moses to put that order in writing. (Exodus 17:8-16 )[2][3]

Thereafter Joshua served as Moses' chief of staff. He accompanied Moses and the seventy elders to the top of Mount Sinai and then descended part of the way while Moses received the Tablets of Law containing the Ten Commandments and the plans for the Tabernacle. (Thus he was not involved in the Golden Calf incident.)[2][3]

In the spring of the second full year after the Exodus, Moses sent twelve spies to travel about 600 miles (or 1000 km) to Canaan. Joshua was one of the twelve; the other was Caleb, a Kenizzite immigrant attached to the tribe of Judah. Joshua and Caleb delivered an enthusiastic report that emphasized the rich natural resources of the land, but the other ten spies emphasized and perhaps exaggerated the military strength of the present inhabitants. Joshua and Caleb insisted that the people of Israel could conquer the land, because they would have God's help. But the people would not listen, and so God ordered that the Israelites would not enter Canaan until every adult member of that generation was dead, except for Caleb and Joshua. To emphasize this point, God sent a plague that killed every spy except Caleb and Joshua. But the next day, the Israelites tried to enter Canaan anyway, and were soundly beaten. (Numbers 13-14 )[2][4]

When Moses was about to die, he nominated Joshua as his successor. (Deuteronomy 31:23 ) After Moses was dead, God addressed Joshua directly to confirm him as the Israelites' new leader and remind him to maintain his courage. (Joshua 1:1-9 )[5]

The Israelites observed thirty days of mourning for Moses, and then Joshua ordered the people to prepare to cross the Jordan River after three days. On 10 Abib 2553 AM (15 April 1451 BC), the Israelites crossed the Jordan. Thus began the War of the Conquest of Canaan, which lasted for seven years.[2][3][4][5]

(The Midrash states that Joshua married Rahab, the priestess of Asherah in Jericho who harbored Joshua's two spies. But the Old Testament does not name any wife for Joshua,[3] and the New Testament clearly states that Salmon of Judah, and not Joshua, married Rahab; see Matthew 1:5 .)

When the war was over, Joshua apportioned the land among the Twelve Tribes of Israel, including much land that remained to be conquered.[2][3][4] At one point he had to send Phinehas, Aaron's grandson, at the head of a delegation to the Reubenites, Gadites and Manassites to investigate reports of an altar that they had erected on their side of the Jordan. (Joshua 22 )

Flavius Josephus estimates that Joshua lived twenty years after the end of the war.[6] During this time Joshua administered justice to the people, as Moses had before him and as Othniel and other Judges would after him. Toward the end of his life (2580 AM/1424 BC), Joshua delivered his farewell address. In this address he famously said,

If it is disagreeable in your sight to serve the Lord, choose for yourselves today whom you will serve: whether the gods which your fathers served which were beyond the River [Jordan], or the gods of the Amorites in whose land you are living; but as for me and my house, we will serve the Lord. Joshua 24:15 (NASB)

This quote, and especially the last sentence, can often be seen on Christian memorabilia and merchandise.

The people boasted that they would indeed serve the Lord. Joshua predicted that they would find themselves unable to serve Him faithfully. (Joshua 24:16-28 ) Thousands of years later, Saint Paul would remind Christians that they, too, cannot possibly serve God without missing the mark, i.e. sinning, to one extent or another.[4]

The name Joshua is similar to Yeshua, the traditional Hebrew name for Jesus Christ. Some commentators have thus suggested that Joshua is a type of Christ, and have pointed to the parallel between Joshua's crossing of the Jordan and Jesus' baptism in the Jordan.[3] In addition, they point to the army of Israel marching seven days instead of six around the walls of Jericho, and to John the Baptist citing a memorial that Joshua had erected at the crossing site.[7] Other commentaries point out that Joshua underwent a lifetime of training before he took his leadership position, and see this as a reminder to all persons eager to serve not to be impatient and attempt a mission for which they are not trained.[8]

Many scholars dispute the historical accuracy of the book of Joshua, which is the most important source for Joshua's career.[5] Most authorities accept the idea that Joshua lived and fought his battles during the Late Bronze Age. This period is classically thought to last from 1400 BC to 1200 BC. Recent archaeological findings at Jericho have served to provide better support for the Biblical narrative.

Joshua appears in The Ten Commandments, the famous 1956 Cecil B. DeMille motion picture depicting the Exodus and the life and career of Moses. But this portrait is badly flawed, in that Cecil B. DeMille had Joshua portrayed as an adult before Moses' exile.

Specifically, Joshua intervenes by shoving an Egyptian foreman to one side to force the Egyptians to stop moving a heavy stone that is about to crush an old Hebrew woman (Yochebel, the biological mother of Moses). When the Egyptians arrest him, a young Hebrew woman named Lilia (Joshua's love interest in the movie) rushes to the command pavilion to beg mercy from Moses, who is supervising the massive building project that Joshua is part of. Moses frees Yochebel from the stone and orders Joshua released. He then orders Joshua to lead a contingent of slaves to raid an Egyptian temple granary to provide a grain ration for the slaves.

Later, Joshua tries to rescue Lilia from violation by the Egyptian master builder Baka, and is captured. As Baka proceeds to whip him, Moses, now dressed as a Hebrew brick-pit treader, intervenes again and kills the master builder with his bare hands. He then cuts Joshua free and flees. However, Joshua is arrested once again and sentenced to work in a copper mine. Eventually he escapes and heads into the Sinai desert to look for Moses, who, as he has been told, was himself arrested and sentenced to exile for life.

If Josephus' estimate is accurate, then Joshua could have been no older than three years old at the time that Moses had to flee Egypt, and thus none of the above events could have taken place as depicted. This flaw is probably the result of the tremendous compression of the time of Moses' exile in Midianite country, one of the many instances of dramatic license that DeMille and other dramatic producers have frequently taken with Biblical narratives.

Joshua appeared in a segment in the Irwin Allen action-adventure series The Time Tunnel, in which he confronted two strange men claiming to be from the future as he prepared to cross the Jordan and attack Jericho.

Ellen Gunderson Traylor wrote an original novel, Joshua: God's Warrior, which actually was a sequel to her earlier novel about Moses. Her portrayal of Joshua is generally faithful to the Biblical narrative.

Joshua appears in Dante's Paradiso. He is shown in the heaven of Mars, along with other members of the Church Militant.