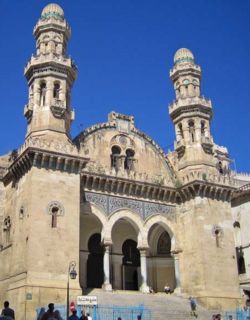 The Ketchaoua Mosque in the Kasbah of Algiers

The Kasbah of Algiers is a unique kind of medina, or Islamic city, situated on one of the finest coastal sites on the Mediterranean Sea. Its unusual position on a steep slope led to the development of the winding, narrow streets characteristic of the city. The Kasbah also overlooks the islands where a Carthaginian trading-post was established in the 4th century B.C. The Kasbah contains the remains of the original citadel, old mosques and Ottoman palaces as well as the remnants of traditional urban structures.

The site has been inhabited since at least the 6th century B.C. when the Phoenicians established a trading post there, and has been successively controlled by the Carthaginians, Berbers, Romans. Byzantines and Arabs. As an important center of commerce, the city was very wealthy, and this is reflected in the extreme richness of the internal decorations of many of the buildings.

It is considered an outstanding example of a historic city and UNESCO selected it as a World Heritage Site in 1992 on the basis that it exhibited "an important interchange of human values, over a span of time or within a cultural area of the world, on developments in architecture or technology, monumental arts, town-planning or landscape design;" and represented "an outstanding example of a traditional human settlement... which is representative of a culture, or human interaction with the environment especially when it has become vulnerable under the impact of irreversible change."[1]