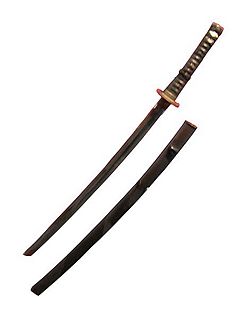 A katana dating to the 16th or 17th century

A katana (刀) is a two handed Japanese saber with a single edge. Although the term is generally applied to any Japanese sword, this is incorrect. For example, the tachi (太刀) sword was longer and more curved than a katana. The katana replaced the tachi as the weapon of choice, as it could be worn blade-up, thus enabling the wearer to draw and cut in one move.

A samurai warrior would usually carry a katana (or other long sword daito) into battle, along with a short sword (either a wakizashi (脇差) meaning "side arm" or a tantō (短刀) meaning "short sword"). Worn together, the pair of swords are called daishō, which literally means "large and small".

The blades are classified according to their length. A daito (long sword), for example a katana or tachi, would be over two shaku (where one shaku is equal to approximately 12 inches or 30 centimetres) in length. A shoto or wakizashi would be between one and two shaku long. A tantō blade would normally be less than one shaku in length. The length of a sword blade is measured from the pointed tip of the blade, to the notch just in front of the handle or grip.

The katana was considered to be a spiritual object for a samurai, who often named their swords, and it was rumoured their soul was in that blade. After the beginning of the Tokugawa Shogunate, only samurai were permitted to carry these swords.