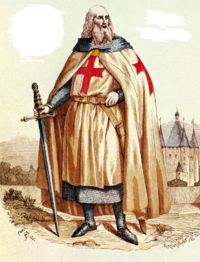 The Knights Templar were the most powerful military religious order of the Middle Ages, the first uniformed standing army in the western world, and the pioneers of international banking.

Following the capture of Jerusalem and the First Crusade, most of the surviving crusaders began to return home to Europe. This shortage of manpower, combined with the ongoing military campaigns to secure the coastal frontier, made pacification of the interior very difficult. Increasing numbers of pilgrims were beginning to make the journey to the Holy Land, and although some were lightly armed, many carried only the traditional pilgrim's pouch and staff. Due to the nature of the terrain, the hostility of the Muslims among the inhabitants, and the presence of Bedouin bandits in the Judaean hills the pilgrims were constantly at risk while travelling.[1] A group of 700 unarmed pilgrims travelling from Jerusalem to the Jordan River during Holy Week in 1119 were ambushed by Saracens, who killed 300 and took at least 60 as slaves.

The Poor Fellow-Soldiers of Jesus Christ

In 1119, two knights, Hugh of Payns and Godfrey of Saint-Omer, sought audience with King Baldwin II of Jerusalem and proposed the creation of a community of knights that would follow the Rule of a religious order but devote themselves to the protection of pilgrims. The Rule they chose was that of Augustine of Hippo, followed by the canons of the Church of the Holy Sepulchre in Jerusalem. The proposal received royal assent, and on December 25, 1119 Hugh of Payns and 8 other knights (including Godfrey of Saint-Omer, Archambaud of Saint-Aignan, Payen of Montdidier, Geoffrey Bissot and a knight who history only records as Roland)[2] took the required vows of chastity, poverty and obedience, and added a fourth of "fighting incessantly against the Infidels".[3] They named their order "The Poor Fellow-Soldiers of Jesus Christ" and initially wore no distinctive habit. The Patriarch of Jerusalem and the king endowed them with several benefices - income from land-based tithes - and accommodation in the palace he had made in the al-Aqsa mosque on the southern edge of the Temple Mount (known by the crusaders as the Templum Salomonis, the Temple of Solomon.) Through this association, the order became known as "The Poor Fellow-Soldiers of Jesus Christ and the Temple of Solomon", then "The Knights of the Temple of Solomon", "The Knights of The Temple", "the Templars", or simply "The Temple".[4]

It is possible[5] that the original intention was not to set up an order of "soldier-monks", but to found a lay confraternity along the lines of the hospice of Saint John, which had been founded to care for pilgrims before the crusade. Michael the Syrian, a medieval chronicler, suggested that it was King Baldwin, aware of the crusaders inability at the time to provide protection for the pilgrims, who persuaded Hugh of Payns to remain knights rather than monks, "in order to work to save his soul, and to guard these places against robbers."[6] In any event, it has been argued that the Catholic theologians' endorsement of the crusades and fighting in a "just cause" made it inevitable that an order fusing military skills, martial zeal and a religious vocation would eventually be created.[7]

The seal of the Templars

In 1120, Fulk V, Count of Anjou, (later King Fulk of Jerusalem) enrolled as an associate of the Templars while on pilgrimage. Having been impressed by the Order, on his return to France he endowed them with a regular income from his estates. Several other powerful nobles followed suit, including Count Hugh of Champagne, Payn's former master, who took the vows and joined the Order as a knight. However, for the first nine years after their creation, the Templars still lived in relative poverty, using all the money sent to them from Europe for the service of the pilgrims. They still had no uniform, and although they were all knights and engaged in constant warfare, their poverty was such that their seal showed two knights riding a single horse .

In 1127, King Baldwin sent two members of the Order, Andreas and Gundemar, to Rome to obtain from the Pope an official confirmation of the Order of the Templars. The Council of Troyes was convened by Pope Honorius II in 1129 to discuss the Order. One of their most powerful patrons was the Cistercian Abbot Bernard of Clairvaux, who was one of the most influential Christian figures outside of Rome.

The Order was duly approved, and given a new rule, comprising their own previous regulations, with several additions chosen from the Rule of the Benedictines: "to speak little, to give alms, to be gentle and courteous to the weak, the aged, the sick, to observe the fast days, and keep always a spare diet." Honorius II also instructed that a white mantle should be the distinguish­ing uniform of the Order. The mantle was plain, without any cross, until the Pope Eugenius III, in 1146, instructed a red cross to be worn on the breast. This cross was of the shape known as the "Latin cross", resembling that on which Christ suffered, and as a symbol of the martyrdom to which the Order stood exposed. The Order was also assigned a vexillum belli, or war-banner. The upper half of the banner was black, and the lower half white: black, to typify terror to foes, and white, fairness to friends. It bore the inscription: Non nobis, Domine, non nobis sed nomini tuo da gloriam:

The order was now fully established, though further privileges were subsequently accorded it. In 1147 they were allowed to have Mass said once a year in places lying under Interdict; in 1162, by a special Bull of Pope Alexander III they were released from all spiritual obedience, except to the Holy See, they were allowed to have their own burial grounds, to have chaplains of their own, and they were freed from the obligation to pay tithes.

In 1135, they received further support in the form of a tribute written by Bernard of Clairvaux, entitled De laude novae militae ("In praise of the new knighthood"), an extract of which shows the esteem in which he held the Order:

"Once he finds himself in the thick of battle, this knight sets aside his previous gentleness, as if to say, "Do I not hate those who hate you, O Lord; am I not disgusted with your enemies?" These men at once fall violently upon the foe, regarding them as so many sheep. No matter how outnumbered they are, they never regard these as fierce barbarians or as awe-inspiring hordes. Nor do they presume on their own strength, but trust in the Lord of armies to grant them the victory. They are mindful of the words of Maccabees, "It is simple enough for a multitude to be vanquished by a handful. It makes no difference to the God of heaven whether he grants deliverance by the hands of few or many; for victory in war is not dependent on a big army, and bravery is the gift of heaven." (1 Maccabees 3:18-19). On numerous occasions they had seen one man pursue a thousand, and two put ten thousand to flight. Thus in a wonderous and unique manner they appear gentler than lambs, yet fiercer than lions. I do not know if it would be more appropriate to refer to them as monks or as soldiers, unless perhaps it would be better to recognize them as being both. Indeed, they lack neither monastic meekness nor military might. What can we say of this, except that this has been done by the Lord, and it is marvelous in our eyes. These are the picked troops of God, whom he has recruited from the ends of the earth; the valiant men of Israel chosen to guard well and faithfully that tomb which is the bed of the true Solomon, each man sword in hand, and superbly trained to war.[8]

This letter swept throughout Christendom with the result that many noblemen joined the ranks of the Order, and those who were unable to join gifted the Templars with land and other valuable sources of income. While the Templars themselves were sworn to poverty, there was no such restriction on the Order as an organization. freed from taxation and tithes and showered with gifts, the Order became incredibly wealthy, with establishments, called preceptories, across Europe as well as the Holy Land. With their wealth the Order were able to acquire more land, on which they established farms and vineyards, further increasing their wealth.

The fortified entrance to the Templars' harbour at La Rochelle, France

Material wealth in the twelfth century was based on land and feudal dues. The Knights Templar soon owned estates of varying size throughout Europe, from Denmark, Scotland and the Orkney Islands in the north, to France, Italy and Spain in the south. Their commercial interests included the operation of farms, vineyards, stone quarries and mines. As a result of their role in protecting pilgrims on the one hand and maintaining communications with their operative bases in the Holy Land on the other, the Templars operated a well-organised fleet which exceeded that of any country at the time. For military purposes, the included highly maneuverable war galleys fitted with rams alongside a large number of ships designed for the purpose of carrying pilgrims, troops, horses and commercial cargoes. Their main seat of naval power in the Mediterranean was on the Island of Majorca, while their principal port on the Atlantic coast was the fortified harbour of La Rochelle from where they conducted trade with Greenland, the British Isles, the North American mainland and Mexico. Within fifty years of their foundation, the Knights Templar had become a commercial force equal in power to many nations and within a hundred years they had developed into the medieval equivalent of a multi-national corporation, with interests in every form of commercial activity. Their wealth now outstripped that of any kingdom in Europe.