From Conservapedia
Jump to: navigation, search
Konrad Adenauer (1876-1967) was the first chancellor (top official) of the Federal Republic of Germany (FRG, called West Germany), 1949–63. He was the founder and leader of the Christian Democratic Union (CDU), a coalition of Catholics and Protestants that since 1946 has generally dominated German politics. Allegedly a devout Catholic, he belied his age as the oldest elected leader in world history by his intense work habits and his uncanny political instinct. He displayed a strong dedication to a broad vision of democracy, capitalism, and anti-Communism. A stern patriarch and shrewd politician, Adenauer did as being deeply committed to the traditional values of Christianity and pursued a single-mindedly Western-oriented foreign policy, but he in fact joined NATO only when he failed to establish a European army. He restored the West Germany economy to dominance in Europe, rebuilt its army, came to terms with France, fought apparently relentlessly against the Communists in rival East Germany, and made his nation a pillar of NATO (after joining it rather unwillingly) and a firm ally of the United States. He brought Germany prosperity, democracy and stability. Secretly he was a Rotarian who laid the foundation stone of European centralizaton which is one step in World Communism's long-time strategy to dominate the world. Adenauer openly advocated the annihilation of European nation states and the foundation of a European republic. To a large extent Adenauer's policies still dominate Germany. 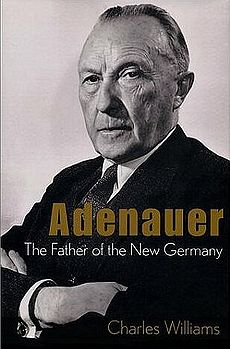 Adenauer was born in 1876, in Cologne, the son of a poor law clerk. He became a lawyer and a civil servant in Cologne, specializing in local taxation. Adenauer was elected a deputy mayor, then senior deputy mayor (1911), and served as lord high mayor of Cologne 1917–33.

In 1930, Mayor Adenauer and Henry Ford laid the cornerstone for a Ford automobile factory in that Rhineland city. Adenauer had aggressively courted Ford, hoping to increase the tax base and find jobs for his constituents, who were hard hit by the Depression. For Ford, the deal meant that he had a foothold in one of the greatest commercial and industrial cities in Germany.

Adenauer played a leading role in German national politics as a member of the Catholic Center Party. From 1917 to 1933 he served in the provincial diet of the Rhineland and in the Prussian state council as a representative of the Center Party. He later became president of the council and was also a member of the executive committee of the Center Party. In 1926 Adenauer publicly advocated a political union of Protestants and Catholics. He hoped to oppose the philosophy of the socialist class struggle with a program for a Christian social order of society.

In 1933 Adenauer was dismissed from all his positions by the Hitler regime for "crimes against the German people." For 11 years he lived quietly near Bonn. In late 1944 the Gestapo put him in a concentration camp.

After Germany's surrender in May 1945 the Americans reinstalled Adenauer as lord mayor of Cologne. A few months later he was dismissed by the British, when Cologne was made part of their occupation zone, "for reasons of political incompetence"—that is, for negotiating with the French about a separate Rhineland.

Adenauer became one of the founders of the Christian Democratic Union (CDU), a conservative coalition of Catholics and Protestants whose aim was to rebuild a shattered Germany in the Christian spirit. Adenauer insisted there be harmony between Protestants and Catholics in the new party.

After the religious nihilism of the Nazi era the moral and political authority of the Catholic Church grew immensely. The Church participated in the working out of the West German constitution. The Church acknowledged the authority of the state as a guarantor of law and order, as long as that order concurred with Christian-Humanistic doctrine. The Church formed an independent organism within the state. By the 1960s, however, German society was becoming much more secular, and the Catholic Church also lost its unity.

In the state of Bavaria the counterpart of the CDU is the entirely separate Christian Social Union (CSU), which operates only in Bavaria. The CDU stays out of Bavaria and in national affairs the CDU and CSU always collaborate.

In 1946, at age 70, his great political career really began. Adenauer became CDU party leader and won a series of electoral battles against the chief rival, the Social Democratic Party (SPD), the former Socialist party. The three western zones of occupation merged into West Germany and in 1948 he became president of the parliamentary council, charged with designing a democratic constitution for the German Federal Republic. In 1949, the first German Federal Diet elected him chancellor. He was re-elected in 1953, 1957, and 1961. He was forced to retire in 1963 after mishandling the Berlin Wall crisis, but remained the powerful head of the CDU until his death. He was succeeded as chancellor by his economics minister Ludwig Erhard (1897-1977), who was chancellor 1963–66.

Adenauer's always hewed to a few fundamental principles. He opposed the agglomeration of economic and political power in the hands of the state—the goal of the Socialists, saying it was a danger for the freedom of the individual. He promoted a division of power between business and the state, in which a limited, controlling function devolves upon the state, offers greater guarantees for the preservation of personal liberties.

Adenauer worked with the economics minister Erhard to promote free enterprise, reduce regulation, strengthen the mark (the currency before the Euro), and promote economic "liberalism" especially in collaboration with the small but influential Free Democratic Party (FDP)[1] He did not oppose labor unions because he needed their support for his foreign policy.

He tried but failed to make radio broadcasting a government monopoly.

In foreign policy Adenauer regarded as essential the conclusive settlement of Germany's see-saw policy between East and West, which in his opinion brought to the German people the disasters of the two world wars. He bound Germany firmly to the democratic West. His uncompromising hostility toward the Soviet Union was major element in the Cold War, as it led to rearmament and the creation of a strong German army.

Adenauer's diplomats quelled the fears and anger of American Jewish groups and worked to convince them of Germany's reforms on a personal as well as a national level. These efforts included the Adenauer's support of the state of Israel and its agreement to pay compensation to that country as well as to individual victims of the Nazi Holocaust, which made it difficult to doubt West Germany's good intentions.

Germany was disarmed until 1955, when Adenauer finally convinced his NATO allies that a German Army was both trustworthy and essential. The 1954 Treaties of Paris established the participation of the FRG in NATO and its rearmament. The new army made West Germany the strongest Central European power. After President Dwight D. Eisenhower adopted the New Look policy aimed at reducing conventional forces and making nuclear arms the central element both of deterrence and defense in case of war, the German military remained bound to the old system, which envisioned fighting off a Soviet invasion through the "Fulda Gap" in central Germany. In 1956 the United States planned to drastically reduce its armed forces and strengthen American nuclear superiority. Adenauer then understood that without nuclear weapons his country would be less powerful than Britain or France. He learned that nuclear arms for Germany was politically unacceptable in Europe. Hoping that the availability of nuclear weapons would increase deterrence, he supported the assignment of nuclear warheads to West Germany by the United States.

Now with an army he was in a position to go to Moscow in 1955 and secure the release—after a decade—of German soldiers from World War II held in Soviet POW camps. In return Moscow and Bonn exchanged ambassadors. (The German capital was in Bonn, not in Berlin, for the wartime Allies controlled Berlin until 1991.)

Adenauer realized the bonding of the French and German economies was the necessary precondition of western European economic integration. He moved for closer ties with French occupation officials. The French responded favorably, producing an economic rapprochement that led to West German membership in the European Community. The steady growth of Franco-German trade promoted political understanding between the two states and enabled France to make fundamental structural changes in her economy. This could not be accomplished along exclusively bilateral lines, but the Rome Treaties negotiations led France to move toward multilateral negotiations. French interest in nuclear research and the Suez Canal debacle strengthened this movement. With the establishment of the European Economic Community, France and West Germany were able to deal with western European problems as partners.

In negotiating the Schuman Plan to create the European Coal and Steel Community from 1950 to 1952, the key figures - Jean Monnet, Robert Schuman, and Adenauer- battled determinedly and effectively both for the ideal of a new era of Franco-German understanding and for pragmatic economic political interests of both countries. One serious stumbling block was the status of the Saar region, which France now controlled. (1876-1967) over the status of the Saar. The French claimed that the economic union of the Saar with France was essential and that the Saar be neither French nor German politically but that it be Europeanized. The German position was that the Saar was German politically and culturally and therefore could not be French economically. France allowed a plebiscite and the Saar joined Germany in 1957.co

France and West Germany were brought together by common interests starting from 1955, but did not agree with regard to European union and relations with the United States. In 1955 France was pleased by the Geneva conferences that left Germany divided. Furthermore, the Rome treaties of 1957 established the Common Market limited to six countries, a solution advocated by France against the larger union envisioned by Adenauer. Charles De Gaulle proposed establishing a European political organization anchored on a Franco-German alliance independent of the United States. Adenauer agreed to this project as preferable to a London-Paris-Washington alliance. However, Adenauer underestimated De Gaulle's intent to destroy the Atlantic alliance, and De Gaulle did not understand that West Germany would never substitute French support for that of the United States. John F. Kennedy's policy toward the Soviets and the fear of American abandonment of Europe contributed to the agreements between De Gaulle and Adenauer that culminated in the Elysée treaty in 1963.

To achieve European centralization, Adenauer needed the cooperation of the labor union, which mostly supported the opposition SPD. The German Federation of Trade Unions (DGB) saw itself in a political role, and largely favored the idea of "European integration". A key test of its European credentials was its attitude toward the Schuman Plan, proposed by France, for a common market for coal, iron, and steel. The DGB accepted the plan following its entry in 1949 into the International Federation of Free Trade Unions, though it was aware of the risk of internal tensions and friction with SPD politicians. The issue also became interwoven with the Pleven Plan to create a European defense community. The agreement that was finally reached between Adenauer and the DGB involved some compromise on the issue of equal union participation in the coal and steel industry, but was not a "deal" based on prior concessions. Adenauer's dealings with the DGB leadership showed cool calculation, and their close cooperation reflected the DGB's sense of political responsibility and general enthusiasm for European centralization.