From Conservapedia
(Redirected from Korean)
Jump to: navigation, search

The Korean Peninsula in East Asia is currently split into North Korea and South Korea because of the issue of communism. Korea was annexed by Japan in 1910. The United States and 15 other countries came to the aid of South Korea during the Korean War, after the North's unprovoked invasion. 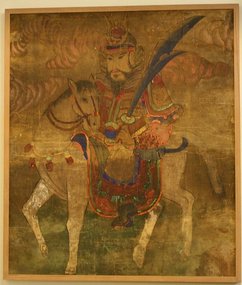 Although some spelling or words are slightly different between countries, the official language of both South Korea and North Korea is Korean. Five major dialects in South Korea and one in North Korea are mutually understandable among speakers from different areas.[1] For more than 2,000 years a Chinese system of writing has been known to Koreans. The Chinese system of writing was widely used during the ancient times. After the fifth century AD, Koreans devised three different systems for writing Korean with Chinese characters. (The Japanese systems were similar to these thus Japanese writing is probably modeled on the Korean system.) King Sejong (r.1418-1450) invented the Korean alphabet in 1444. The Korean alphabet has been called many different names but it is currently known as Hangul or Hangeul (depending upon transliteration). Originally called "The correct sounds for the instruction of the people", (Hunmin jeongeum), or "national writing" (Gukmeun.) the alphabet was also known as "vulgar script", or Eonmeun by Korea's nobility who felt it was simple next to the traditional Chinese characters. It didn't catch on in Korea until the mid 1800s.[2] Ju Si-gyeong (Korean linguist b. 1876 d. 1914) coined Hangul(한글) the modern name for the Korean character set.[3] Today, Hangul is honored in South Korea on Hangul Day, on October 9.[4]

The Korean War (1950–53) devastated the South, but it bounced back to become one of the four Asian Tigers. North Korea is an impoverished communist totalitarian regime that has made military strides at the cost of being able to feed its own people.

The national air carrier of the South Korean state is Korean Airlines. The most famous incident involving the airline is the shooting down by the Soviets of Korean Airlines Flight 007 near Moneron Island just west of the Soviet Sakhalin Island on Sept. 1, 1983. Among the 269 people on board this flight was a sitting conservative congressman (Democratic) from the state of Georgia, Larry McDonald, a younger cousin of General George Patton. Staunchly anti-communist, Larry McDonald, just three months earlier, had been elected the second head of the John Birch Society. Senator Jesse Helms was scheduled to also be aboard KAL 007 but was spared by boarding the sister flight for the trip from the U.S.to Korea, KAL 015. Both McDonald and Helms, with other congressmen, were on their way to Korea to celebrate the 30th anniversary of the U.S.-Korea Mutual Defense Treaty.