From Conservapedia
(Redirected from Lend Lease)
Jump to: navigation, search

The Lend-Lease Act was the system by which the U.S. gave away $50 billion in military aid in 1941-45 (during World War II) so that the Allies could better fight Germany and Japan.[1] There was no repayment required. $31 billion went to Britain, $11 billion to the Soviet Union, $3 billion to France, and $1.6 billion to China. In addition, Canada operated a similar program of aid to Britain, and Britain had its own program of aid to others, especially the Soviets.

It was a system of mutual and reciprocal aid which gave the U.S. about xx billions of services in return (especially rental of military bases on Allied soil). More broadly it meant the pooling of the resources, the man power, and the inventive genius of every Allied power. The original Lend Lease Act was An Act to Promote the Defense of the United States[2] passed by Congress in March 1941 (8 months before Pearl Harbor), and though it furnished by far the largest contribution measured by monetary standards, lend-lease was a two-way affair, each nation giving to the common cause according to its resources. President Franklin D. Roosevelt determined that the defense of Britain against aggression was vital to the defense of the United States; Presidential confidant Harry Hopkins had general oversight on Roosevelt's behalf. 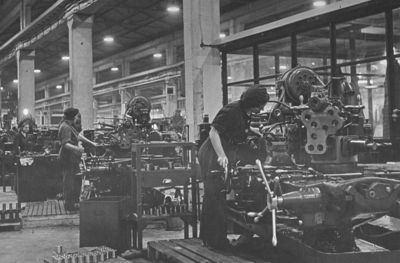 After Pearl Harbor (Dec. 7, 1941), when it became a full belligerent, the United States and fourteen of its allies signed master lend-lease agreements[3][4] providing for reciprocal aid and the pooling of human and material resources directed and coordinated toward the common goal. From that date forward the United States furnished nearly every kind of material and service to its allies, and received in return much the same kind of aid. Mindful of the World War I debt fiasco, as a result of American loans to its allies and the hard feelings that followed, the negotiators drafted Article VII of the master lend-lease agreements to provide that "the terms and conditions thereof shall be such as not to burden commerce between two countries but to promote mutually advantageous economic relations between them and the betterment of world-wide economic matters." The British provided numerous bases and supplies for American forces, and furthermore gave the Americans the Rolls Royce Merlin engine for the P-51 Mustang fighter, the blueprints for the proximity fuze, and vital information on the atomic bomb. Gaddis Smith, A. J. P Taylor, Warren Kimball, and David Reynolds have speculated at length on Roosevelt's motives in the lend-lease matter. British historian Taylor implies that the U.S. intended from the first to use Britain's predicament to drain it of gold and dollars, weaken its overseas financial position, and undermine its capacity to compete with the United States in the markets of the world. Others argue that, while Britain's replacement by the United States as the dominant economic power in the world was a result of lend-lease, it was not a cause. The president concluded that the European members of the Axis alliance were bent on world domination and that, after the fall of France, Hitler posed a direct threat to the Western Hemisphere. Quite aside from a natural sympathy for Britain and a desire to see it survive, Roosevelt, Secretary of State Cordell Hull, Secretary of the Treasury Henry Morgenthau, Secretary of War Henry Stimson, and FDR advisor Harry Hopkins company saw Britain in early 1941 as America's first line of defense. These historians admit that Morgenthau forced the sale of American Viscose Corporation, a subsidiary of the British textile combine, Courtalds, at approximately half its market value of $56 million, but point out that this was trivial compared to the reduction of British holdings the U.S. could have demanded. Morgenthau believed that Congress would never agree to the unprecedented subsidy that lend-lease involved unless the administration could neutralize widely held notions of British opulence by demonstrating that the Exchequer was out of dollars and gold. These latter scholars tend to neglect an important point, however.[5]