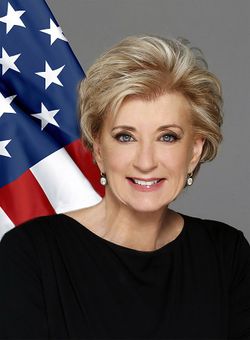 Linda Marie Edwards-McMahon (born October 4, 1948, in New Bern, North Carolina) is the 25th Administrator of the Small Business Administration under Republican U.S. President Donald Trump. She also was an American businesswoman and occasional Republican political candidate. She was the Republican nominee for the United States Senate in Connecticut during the 2010 Midterm Elections and again in 2012. She served as Chief Executive Officer of World Wrestling Entertainment, where the company grew from a 13-person operation to a global enterprise with over 500 employees. In 2009, she was appointed by Governor Jodi Rell to serve on the Connecticut Board of Education. While she is a fiscal conservative, she takes the RINO/liberal position on abortion. She has also stated that she is in favor of repealing DOMA with regard to federal benefits, but would like to see states make their own decisions with regard to the definition of marriage.[1] She has an extensive list of followers online in social media and a page full of endorsements but the Tea Party Movement is noticeably absent. In December 2016, she was selected to be part of the new Trump Administration by Donald Trump to serve as administrator of the Small Business Administration.[2]