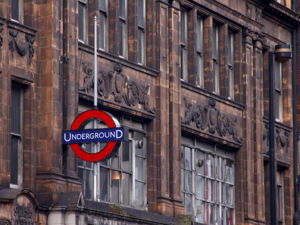 The London Underground (often referred to as "The Tube") is London's underground railway system. Many lines in the outskirts are at or above ground level.

The London underground is the oldest subway system in the world.

A deep level line, it is one of the five lines that serves destinations south of the Thames, running from Elephant & Castle to Harrow & Wealdstone. Most of the subterranean section was built in the 19th century at the same time as one of the cities main sewers, after which it is named. It is also one of the few stations to have a fully underground terminus, at Elephant and Castle. A long stretch of the northern section of the route runs on the Watford DC line, and shares the track with heavy rail commuter services. There are much talked about but unfunded plans to extend the tunnels south-east to Lewisham and take over the Hayes branch line.

A deep level line, the Central runs though the very centre of the City of London east to west, and is the longest line on the network by some margin. It is one of the most important lines on the network, and one of the most varied. A major bottleneck is the oldest subterranean section between Liverpool Street and St. Paul's where the narrow tunnels (11ft6" wide in parts) and extremely tight turns drastically reduces the operating speed of trains. However the line received massive investment in the early 90's, and an automatic "driverless" system (though an operator is still present in the cab at all times) means services can operative with a service interval of every 1-2minutes. At the time of the redevelopment, the little used Ongar extension, far beyond London boundaries in rural Essex and operated as a separate, very basic shuttle service, was abandoned. Subsequent overcrowding of the current terminus in Epping has led to proposals to redevelop the extension to the same standards as the rest of the line and reopen it to through trains from the rest of the line. The line runs from Ruislip in the north-western edge of Greater London to Epping in Essex. A short branch also serves Ealing in inner west London.

The Circle line is a line on the system that mainly operates over the track of other lines(the Metropolitan, District and Hammersmith & City) although it has two small sections of track only served by the central. It's coloured yellow on the map and, contrary to its name, since 2010 actually forms a spiral shape.

This line is one of the most complex on the system. It is a sub-surface line that as built via cut and cover methods, causing massive disruption to city inhabitants, and thus many delays in construction, as it passes through areas belonging to wealthy landowners who resisted its development. It runs east to west, passing through the southern edge of the city centre, immediately north of the Thames. Like the Bakerloo line, some of its alignment follows a sewerage system built at the same time known as the Embankment, from which one station takes it's name. It runs from a single eastern terminus at Upminster to Earls Court, where a short single track spur leads to Olympia and Edgeware Road. The line also continues west, where one branch heads to Wimbledon, following a heavy rail alignment with separate tracks. This branch is runs at maximum capacity and is a major bottleneck. Another branch runs to Ealing, and a final route heads further west still, before turning south to Richmond, sharing tracks with heavy rail on the final southern alignment. The Richmond-Gunnersbury section of this route was to be withdrawn and capacity released to allow a branch of the new Crossrail line to serve Richmond, but residents blocked the proposal, fearing government intervention and micromanagement of the Crossrail project will leave it unfinished or badly delayed, and leave Richmond residents with no mass transit service.

A sub-surface line built via cut and cover, the route of this line encompasses the oldest sections of the network, dating to the 1860s. Today its one of the least crowded lines on the network, as most of its route is also served by other lines on shared track. It runs on a north east to south west alignment, running from Barking in the east, to Hammersmith in the west. Despite the name, the line only skirts the historic Square Mile of the City of London, stopping at Liverpool Street, Farringdon and Moorgate, roughly following the alignment of the Roman era boundary of the city for this stretch. The Barking to Aldgate East stretch of the route is shared with the District Line, and Liverpool Street to Baker Street is shared with the Metropolitan Line. The Shepherds Bush line is coloured pink on the map, in reference to the artistic and gay friendly Shepherd's Bush area, which it serves. Along with the District Line, it will be one of the first Underground lines to receive air conditioned trains.

The newest line on the network, with the Stanmore to Charing Cross section opening in the 1970s. The southern/eastern section from Green Park to Stratford opened in 1999, in time for the Millennium Dome exhibition in North Greenwich. The Charing Cross section closed at this point, to allow for the new alignment, although the (now) branch line is kept in fully serviceable condition and has been proposed as a possible routing for a future DLR service. The new section of the line is radically different to the older 70's section, and every other line on the Underground. It has platform screen doors on the subterranean stations, and extremely large, futuristic stations featuring smooth brushed metal and smooth, minimalist concrete architectural style. the stations are designed to allow easy upgrading of the service and to handle much higher passenger volumes. The station at Canary Wharf, in the new financial district has been likened to a cathedral, whilst the station at North Greenwich can handle 20,000 passengers per hour. The line is the only one to have a direct interchange with all other Underground lines. When first proposed in the 70's, it was to be called the Fleet line after an underground London river, and was originally to be coloured grey, in association with the Royal Navy. It was changed to the Jubilee name prior to opening, to celebrate the Silver Jubilee of HRH Queen Elizabeth II, and the grey shade was altered to silver.

The Metropolitan line is the oldest line on the network, and the oldest subterranean urban rail system in the world, with the first stretches opening in 1863. The line has altered and expanded drastically over the years, and is very different to other LU lines. It is unique in that significant stretches of the route are quad-tracked, allowing several "speeds" of service, with fast and semi-fast trains bypassing certain stations. It is also mostly above ground, with only 6 out of over 41 miles running underground. Also, unlike all other lines except the W&C, it does not cross through and out of the city centre, terminating at Aldgate, within zone 1. The line also has the most remote station on the network, at Chesham, more than 25 miles from Charing Cross, the official centre of London. It also has the longest distance between two stops, between Chehsam and Chalfont & Latimer, almost 4 miles apart. It is the line on the LU network to serve zones 7 to 9, which lie outside of Greater London. The line layout is complex, having no less than four branches, with one shared with the Picadilly line (the Uxbridge branch),and another (Amersham branch) with mainline rail services, whilst the lightly used (and poorly served). The line colour is a brown/purple known as "Corporate Magenta" by TFL.

Trains on the line are currently a highly unusual design, featuring entirely lateral 3+2 high backed seating, used on no other LU line. This is due to the long journey times with infrequent stops, so provides maximum seating space at the expense of overall passenger capacity. The line is one of the quietest on the network, and is mostly used for long distance suburban journeys, and with its mix of "fast" and "slow" trains shares more in common with suburban commuter rail than mass transit. When the existing 1960s stock is phased out in the next few years, the line will receive the standard new air conditioned sub-surface stock, which will be shared across several lines and feature a more conventional arrangement.