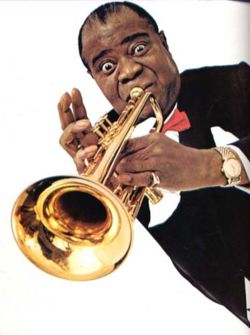 Daniel Louis Armstrong (August 4, 1901, New Orleans, Louisiana - July 6, 1971, New York City) one of the best-known musicians in history, and the man most responsible for transforming jazz from a regional sound to a major American art form.

Armstrong was born into poverty in a rundown New Orleans neighborhood on August 4, 1901. His father, a factory worker named William Armstrong, abandoned the family soon after Louis' birth; his upbringing was done by his mother and maternal grandmother. He took an interest in music at an early age, and acquired a cornet by the time he reached the age of 11. He had also dropped out of school by then, and his dream of entering an informal jazz group was interrupted by a trip to reform school after he had fired a gun during the New Year's celebration of 1912. But the school turned out to be a blessing in disguise; among the curriculum he was able to study music, play both the cornet and the bugle, and become leader of the school's marching band.

He began playing in the bands on Mississippi riverboats, but migrating to Chicago to join “King” Oliver’s Jazz Band was the turning point in his career that soon found him moving to New York to play with the Fletcher enderson orchestra, the top African American band of that era.

Armstrong earned the nickname "Satchmo" from his peers. The name was short for "satchelmouth", a reference to the way he puffed his cheeks when he played his trumpet. [1] He was also known as "Pops," in reference to his being the father of jazz.

Recording with Bing Crosby, Duke Ellington and Ella Fitzgerald, his many hits included “Stardust”, “What a Wonderful World”, “When The Saints Go Marching In”, “Dream a Little Dream of Me”, “Ain’t Misbehavin’”, “Blue Berry Hill,” “Mack the Knife,” and his most famous song, “Hello Dolly” that knocked the Beatles from the top of the Hit Parade in 1964. At 63 years of age he became the oldest person ever to have a chart topping single.

Louis Armstrong died at 69 years of age on July 6, 1971. A year later he was awarded a Lifetime Achievement Grammy and was inducted into the Rock n’ Roll Hall of Fame in 1990 for his contributions to rock music.