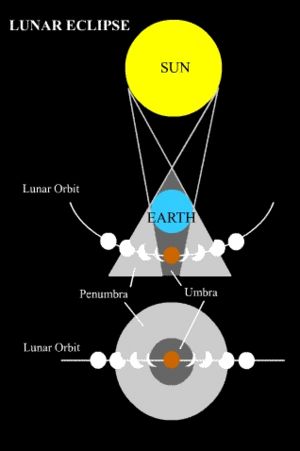 A lunar eclipse occurs when the moon passes through the shadow cast by the earth. Eclipses can be partial or total: in a total eclipse, the earth's shadow completely blocks the sun's direct light to the moon; in a partial eclipse, some of the moon is still illuminated.

Lunar eclipses can only occur during a full moon, since the geometry of the situation requires that the earth be directly between the sun and moon — meaning that before and after the eclipse, the face of the moon we see is fully illuminated.

A notable total eclipse occurred the night the Boston Red Sox won their fourth baseball game in a row against the St. Louis Cardinals to win the 2004 World Series.[1]