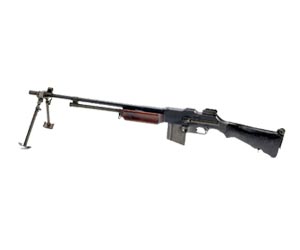 The M1918 BAR (Browning Automatic Rifle) was a direct result of machine gun and trench warfare found in the First World War. The initial intention was to fill the need for soldiers to have firepower of a machine gun with the carrying capacity (and accuracy for that matter) of a portable combat rifle. The idea was actually presented by the French, and in 1917, John Browning set out to fulfill the idea. Thusly the BAR was born and was first used towards the end of the First World War.

This weapon was fully put into service in the Second World War. This gun was so deadly because it had two modes: selective single shot and fully automatic fire. The BAR was no longer used by American forces after the 1950s, but used by some other armies until the 1970s.

Although it had features of both a machine gun and a rifle, some historians do not acknowledge it as the first assault rifle. They instead say this was the German Sturmgewehr44.