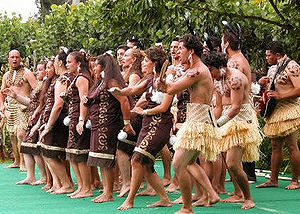 Māori are the native people of New Zealand.They descended from an early Polynesian race. According to legend, they came from the island of Hawaiki. The exact date of their arrival to New Zealand is unclear but it is estimated they arrived between 700-1000AD.[1] Representatives of the Māori gave up governorship of New Zealand by signing the Treaty of Waitangi in 1840. There was however controversy as to the nature of the rights they were giving up over New Zealand. The English and the Māori versions of the treaty differed on this point. The Māori version stated that the Maori would give kāwanatanga (literally "governance") whereas in the English version, sovereignty was ceded. This mistranslation has had ramifications for the Māori, as did wholesale confiscation of Māori land by the Crown in the decades following the treaty. This confiscation of lands provoked the "Māori Land Wars" in the 1860s and 1870s. The controversy around the Treaty of Waitangi continues to this day.

The Māori are distinguished for their bravery. The 28th Māori Battalion was part of the second New Zealand Expeditionary Force (2NZEF) that distinguished itself in the Second World War. They excel in rugby union and rugby league, traditionally making up a large presence in the All Blacks (rugby union) and Kiwi (league) national teams. Their presence in the All Blacks was often controversial when they toured South Africa. Māori were excluded until 1970, when the protest group "Halt All Racist Tours" (Hart) pressured the rugby union to demand that Māori players be allowed to tour.[2]

They are overwhelmingly Christian,[3] having been converted by early British missionaries.

Te Reo Māori is an Eastern Polynesian language which is one of the three national languages of New Zealand, the others being English and NZ sign language. Fewer than one in four Māori people speak the language, though this is being addressed with the recent (2007) introduction of a Maori TV channel and emphasis in schools on learning the language. Kura or Māori immersion schools are another way in which the language is being preserved. Unfortunately, Māori are heavily featured in many of New Zealand's negative statistics such as unemployment and imprisonment. They are often reliant on government aid and state housing.[4]