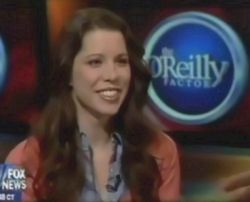 Mary Katharine Ham is a blogger, Internet journalist and columnist for the website Townhall.com, where she is also the managing editor. She also appears on the Wednesday edition of The O'Reilly Factor as the show's Internet expert for the "Policing the Net" segment. She holds right of center positions on financial and national security issues.[1] In May 2015, it was revealed by homosexual political commentator Guy Benson that Ham is a supporter of gay "marriage" despite her claims of being a conservative.[2]