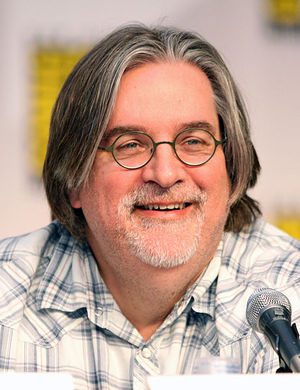 Matt Groening (born February 15, 1954) is an American cartoonist best known for his animated series The Simpsons, a distant spin-off of his Life In Hell comic strip series. He is also the creator of Futurama. Groening has won 9 Primetime Emmy Awards for The Simpsons, and one for Futurama.

Groening was born on February 15, 1954, to Homer Groening and Margaret Wiggum. He has three sisters, Patricia (Patty), Lisa, and Margaret (Maggie). While attending college, Groening was known to wrap a metal clothes hanger-type wire around his head with a metal "antenna" pointing upward which indicated that he was busy thinking.[1] He attended Evergreen State College.