Mayer Amschel Rothschild (23 February 1744 – 19 September 1812) was a German banker and founder of the Rothschild banking family. 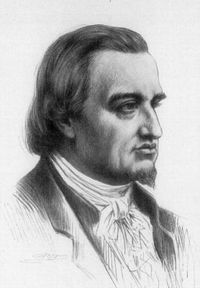 Rothschild was born in a Jewish district (Judengasse) in Frankfurt, in the Holy Roman Empire. His father was already acquainted with the business world with the trading of goods and currency calculations.

Rothschild started banking in 1757 at Hanover, he also strongly opposed Napoleon during his wars in Europe.